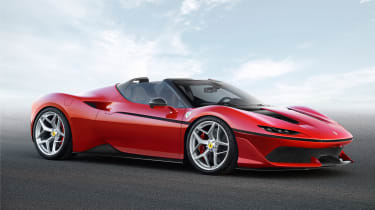 Ferrari has revealed a new special edition model to mark fifty years in the Japanese market, which will be limited to just ten examples. The eye-catching Ferrari J50 is a two-seat mid-engine roadster based on the 488 Spider, though the 3.9-litre twin-turbo V8 has been tweaked to produce 20bhp extra, meaning a total power output of 681bhp.

The J50 is another product of Ferrari’s Special Projects division – responsible for cars like the 458 MM Speciale and the recently unearthed SP275 RW Competizione. Like those cars it features outlandish styling, crafted by the team at Ferrari’s Styling Centre in Maranello. All ten examples will be modified and tailored specifically to their customers’ requirements.

The J50 is a low-slung roadster boasting a targa top roof and a helmet visor effect windscreen. The top itself is made from two sheets of Carbon-Fibre, which stow away behind the seats.

At the front is a redesigned, lower looking front bumper with a large chicken wire mesh intake, new aerodynamic elements and sleeker headlights.

A black dividing line is embedded within it, and swoops around the sides of the car. Ferrari says the black line is reminiscent of the F40 and F50, and it tugs the beltline of the new Ferrari downwards, making the car appear even lower. Huge, swollen wheel arches round off the muscular new look. 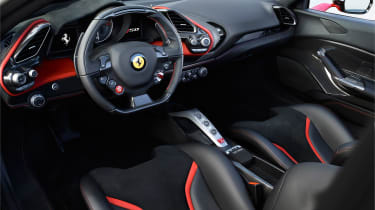 Around the back the re-designed rear end gets a large transparent polycarbonate engine cover and sits behind two distinctive black roll hoops. An aerofoil piece of bodywork bridges over them. A new quad-taillight setup makes the cut, sitting beneath a tweaked rear wing and above a jet engine afterburner inspired rear diffuser. It all rides on unique 20-inch forged wheels.

In the cabin, the interior is finished in red and black leather and Alcantara. These hyper exclusive special edition cars are likely to be sold to some of Ferrari’s most distinctive customers, and as such we don’t have any pricing details. A tag far above and beyond the £204k starting price of a standard 488 Spider is a given though.

Is the J50 the best looking Special Projects Ferrari yet? Let us know your thoughts in the comments.