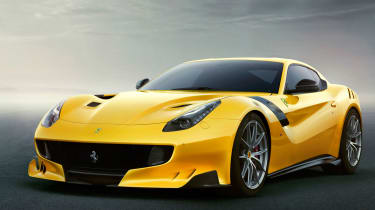 A lightweight Ferrari F12 Speciale always seemed a possibility, even though the mind-blowing performance served up by the standard car scarcely warranted it.  The Ferrari F12tdf (Tour de France) is that car, a searing hardcore supercar named in homage to the endurance road race that Ferrari dominated in the 1950s and 60s.

The F12tdf uses the existing naturally aspirated 6.3-litre V12 as the standard Ferrari F12 Berlinetta, albeit with power uprated from 731bhp to 769bhp. That shaves two tenths of a second off the standard F12’s 0-62mph time (now 2.9 seconds), while Ferrari claims a top speed ‘in excess of 211mph’. 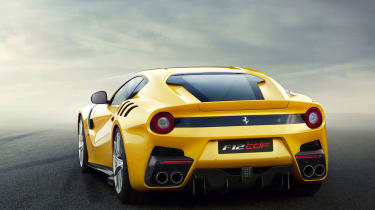 Not only can it accelerate as fast as a LaFerrari, it’ll stop as quickly, too. The one-piece brake callipers have been lifted from the £1m hypercar, and can stop the tdf from 124mph in just 121m.

The gearbox has been tweaked to make the ratios six per cent shorter and 30 per cent faster on the upshift. Downshifts are also quicker, with response rates improved by 40 per cent. 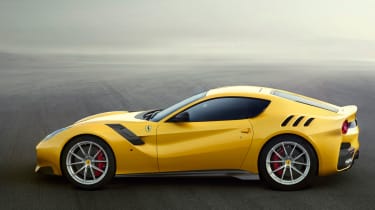 In terms of technical innovations, Ferrari engineers have installed a rear-wheel steering system to compensate the car’s natural tendency to oversteer. Known as the Virtual Short Wheelbase, it is integrated with the other vehicle control systems, which improves steering response and high-speed stability.

It’s 110kg lighter than the standard F12 thanks to a radical redesign of the body and extensive use of carbon fibre. From the front the F12tdf gets a lower, wider stance and sharp front splitter, as well as fins in the bumper and bonnet. There are slats in the rear haunches, too, helping double the car’s aerodynamic efficiency over the standard car. 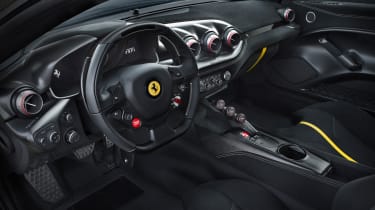 The rear spoiler is now 60mm longer and 30mm higher, while the rear screen is more steeply raked. It now generates 230kg of downforce at 124mph – 107kg more than before. At the rear, there’s an active diffuser, with the same centrally-mounted foglight – inspired by the company’s F1 car.

Tell us what you think of the new Ferrari F12tdf in the comments section below...