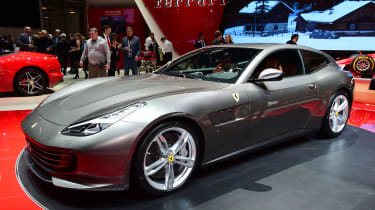 The new Ferrari GTC4 Lusso has been unveiled at Geneva, along with a slew of technical and performance details that reveal the extent of upgrades over its predecessor, the Ferrari FF.

It may look like a facelift, but the four-seat Ferrari GT car’s style, aerodynamics, powertrain and chassis dynamics have all been reworked, helping to justify the model’s mid-life name change. The new GTC4 Lusso badge makes reference to famous Ferraris which have gone before it, such as the 330 GTC, the four-seat 330 GT – one of Enzo’s favourites, apparently – and the 250 GT Berlinetta Lusso. 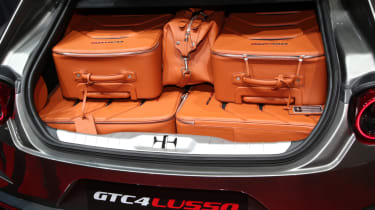 The styling isn’t dramatically different to the FF, but it’s easy to spot the new headlights, broader front grille and revised rear lights. The curve of the roof has been lowered at the rear too, making the car a little less boxy than the FF but retaining the ‘shooting brake’ practicality.

As well as making the new model a little easier on the eye, the changes bring significant aerodynamic benefits. The new front air intakes allow the engine to breath more freely, while the new rear diffuser and roof-mounted spoiler help improve the GTC4 Lusso’s drag co-efficient by 6 percent against the FF. Triple-louvre air vents on the flanks evoke the style of the old 330 GTC, while ducting air from the engine bay and wheel arches – reducing drag and improving downforce. 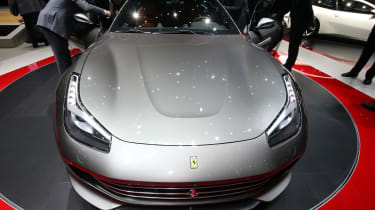 Under the bonnet the naturally aspirated 6.3-litre V12 engine remains, but the compression ratio is is up 13.5:1, and power has increased from 651bhp to 681bhp. Torque also rises from 683Nm to 697Nm – 80 percent of which is available from just 1,750rpm. The added grunt shaves three-tenths from the GTC4 Lusso’s 0-62mph sprint time, which now takes 3.4 seconds. Top speed remains at 208mph.

Interestingly there’s a new exhaust manifold set-up too, including an electronic by-pass valve that has allowed Ferrari to hone the engine harmonics. The V12 is now said to make overtly sporting noises while pressing-on, while noise is reduced to ‘a subtle yet potent purr’ in the city or when cruising. 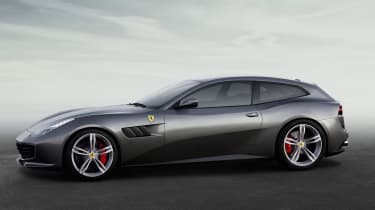 To aid agility, Ferrari has also added four-wheel steer – first fitted to the F12 tdf. The system is integrated with the GTC4 Lusso’s four-wheel drive transmission, which also features an electronic differential and Ferrari’s Slip Side Control (4.0) system, and is now known as 4RM-S.

Inside, a new optional display on the centre console provides an engine readout for the front-seat passenger, while a new 10.25-inch hi-res, touchscreen display has also been added. And as a clear nod to the GTC4 Lusso’s proposed role as the Ferrari you drive every day, there have been significant improvements to cabin refinement with greater sound insulation and a quieter climate control system.