Ferrari's latest GT car is better than the FF it replaces in every respect. All hail the Ferrari GTC4 Lusso!

The Ferrari GTC4 Lusso is mesmerizingly good to drive, but brilliantly usable with it. A ballistic engine, composed but controlled chassis and relatively impressive practicality mean this Ferrari is in a class of one. It might cost nearly a quarter of a million pounds, but rival brands can’t compete with what the GTC4 offers – this is a Ferrari you really can use every day.

Ferrari is determined it won’t build an SUV. The firm’s CEO Sergio Marchionne even said you’d have to shoot him before the Italian brand put an off-roader into production. However, it’s no stranger to four-wheel drive, and the new Ferrari GTC4 Lusso finishes what it started with the FF four-seat, all-wheel drive GT, blending even more luxury with bonkers performance.

The heart of any Ferrari is its engine – especially a front-engined GT with a 681bhp V12. Whereas the 488 has turned to turbos, this 6.3-litre unit reminds you how rewarding a big, naturally aspirated engine can be.

There’s monumental performance to tap too. It revs to the heavens with an 8,250rpm redline, but with 80 per cent of its 697Nm torque output available from 1,750rpm, it pulls incredibly strongly from low down too. 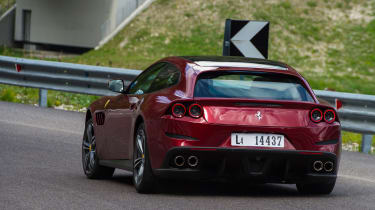 It doesn’t have the instant shove of a turbocharged motor, but instead it builds with predictable linearity to a mesmerising crescendo, where the soundtrack explodes with a glorious wail.

Ferrari’s added a new exhaust manifold and tuned it to deliver an addictive noise so it sounds stunning when you’ve got the throttle pinned to the bulkhead. But this is also a relaxed GT car that’ll cross continents in superb comfort, so when you back off the GTC4’s engine noise isn’t at all intrusive, with software tweaks to keep the exhaust valves closed for longer to improve cruising refinement.

This ability has been improved even further with more sound insulation, quieter climate control and 20 per cent more rigid suspension pick-up points.

This helps the ride, too. Select bumpy road mode to soften the GTC4’s suspension and the car feels more fluid, moving with the road surface nicely and offering bags of composure. 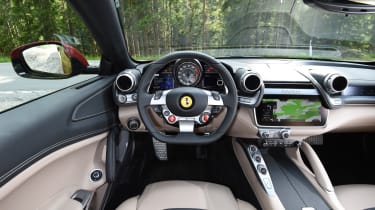 The dampers are connected to Ferrari’s fourth-generation Slide Slip Control system that can change the firmness of the suspension, alter the E-Diff and even tweak the four-wheel drive system.

Unlike in most all-wheel drive cars, the front axle takes power from the front of the engine so there’s no centre diff, and it gives massive traction so you can deploy all 681bhp without any unwanted drama.

Thanks to this traction off the line and the seven-speed dual-clutch auto’s launch control, the GTC4 will rocket from 0-62mph in 3.4 seconds and hit 208mph flat out.

The big development for the Lusso, however, is the adoption of Ferrari’s four-wheel steering from the F12 tdf supercar. It’s been slightly recalibrated to lessen the hyper-alert character, but in corners the tech effectively shortens the car’s wheelbase, giving this vast four-seat GT the agility of a much smaller car. 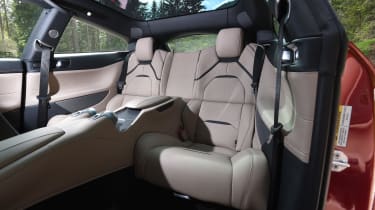 It’s quite incredible how nimble the GTC4 is, as with Ferrari’s trademark super fast steering, the rate at which it turns into corners can take you by surprise at first.

The quick steering means it actually feels slightly nervous until you get used to the weight and the speed but once you do, the GTC4 shrinks around you and inspires huge confidence to use everything at your disposal.

Back off and you realise how far the Ferrari’s GT credentials stretch. A 10-inch touchscreen with Apple CarPlay and a split-screen view – plus an eight-inch display for the passenger – means it offers all the tech you expect from a long-distance continent crosser.

And it’s here where the GTC4 really excels. Ferrari has widened its breadth of character even further, so it’s now a better, faster, more agile sports car when you want it, and a more refined, comfortable GT car when you don’t. 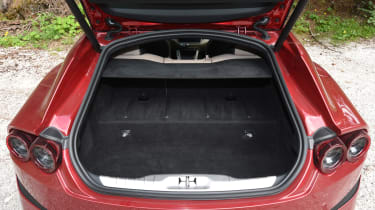 Despite the redesigned roofline – along with other styling tweaks to the front and rear end – there’s ample headroom for adults, while legroom in the rear is improved over the FF as well. In fact, it’s really quite spacious in the rear.

Ferrari claims a 450 litre boot, 800 litres with the rear seats folded flat. This is more than enough room for four people’s luggage, while the hatchback and folding ski hatch improve practicality by another notch.

You might not think practicality is important if you’re buying a quarter of a million pound Ferrari, but the GTC4 has plenty of it. And while its big V12 isn’t exactly the most efficient engine, Ferrari has upped fuel economy to 18.8mpg and reduced CO2 to 350g/km with a few engine mods, despite also increasing power.

Still, best to gloss over this part and concentrate on what is one of the most usable performance cars ever.