The substantial new 4-seat Ferrari GTC4 Lusso takes to the road in the UK. We see if it fits 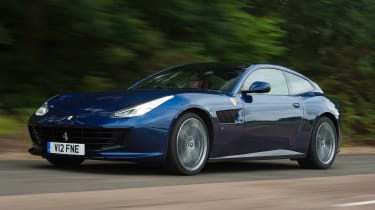 The GTC4 Lusso’s breadth of ability is nothing short of fantastic. Forget the price, because at this level of the market most buyers do and this car nails its brief brilliantly. It’s as agile, as involving and as startlingly rapid as some of the best drivers’ cars on sale today, but it also offers comfort, refinement and surprising usability even by big GT car standards. The V12 is a shining beacon of why large, naturally aspirated motors make cars like these great.

Car brands talk a lot about emotion, but much of it is engineered or contrived. Not with this V12. From the moment you thumb the steering wheel-mounted starter button and the GTC4’s 6.3-litre motor fires into life - settling at a busy, flat idle - to the first chance you get to extend the delicate rev counter needle towards a devilish 8,000rpm, this motor will resonate with you. Or it will if you’ve got a even molecule of octane in your system.

But the car is so much more than just an engine. In the transformation from FF (four-seat, four-wheel drive) to GTC4 Lusso, this big Ferrari four-seat GT has gained some clever tech, such as the four-wheel steering that made its debut on the F12 tdf and now has elevated the 812 Superfast to a stratospheric level of ability. 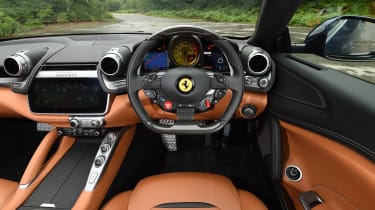 The technology is integrated as part of the new 4RM-S and improved 4RM EVO systems, which between them manage the distribution of torque to both axles, that rear-wheel steering system, the fourth-generation of Ferrari’s Side Slip Control (SSC4), the E-Diff and the SCM-E adjustable suspension damping.

The car is also more aerodynamic than the FF, while the V12 now kicks out 681bhp and 697Nm of torque. But just because the motor revs to a heady 8,250rpm, don’t think it means you have to. 80 per cent of that torque figure is available from just 1,750rpm, so the GTC4 pulls with real gusto low down.

It offers the kind of throttle response you only get from a naturally aspirated engine, too. Rev it right the way out and the snorting wail from that motor is one of the most addictive sounds around. Ferrari has actually reprogrammed the exhaust by-pass valve so the GTC4 is even more refined than the FF at motorway speeds, but use plenty of throttle and plenty of revs and the exhaust system – featuring new manifolds – delivers a suitable soundtrack.

Launch control, four-wheel drive and a rapid-fire seven-speed dual-clutch gearbox means the 0-62mph sprint is dispatched in just 3.4 seconds, which is impressive for a car with a kerb weight of 1,920kg. 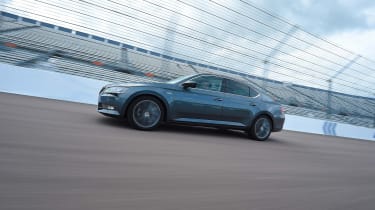 Despite a near 3.0-metre wheelbase the GTC4’s rear-wheel steering means it’s agile. In fact, on crowned and rutted UK roads it’s agility can even feel a little artificial, but once you get used to the rate of response from the fast and fairly light steering, and the speed with which the Ferrari turns in, it becomes natural to throw such a big car at fairly tight corners and lean on the marvellous level of grip.

In the UK, you’re always best selecting ‘bumpy road mode’ for the suspension as soon as you get in. It gives the chassis more compliance and even on 20-inch wheels the Ferrari filters out nasty surfaces fairly well in this setting. Of course, you’ll still feel ridges in the road, but the car isn’t as upset by them as you’d think – and even on a bumpy road, traction is brilliant. You get that sense of rear-wheel drive balance shining through with the manettino control dial set to Sport mode, and with such power and torque the GTC4’s rear axle will inevitably start to slide if you’re over zealous with the throttle. But as the back tyres start to spin up the Ferrari’s four-wheel drive system cuts in to help out.

This is unlike a conventional four-wheel drive system, as the front axle takes its power off the front of the engine through a separate gearbox, while the torque vectoring and the reassuring hand of the Side Slip Control system mean the GTC4 Lusso feels fluid and fast. 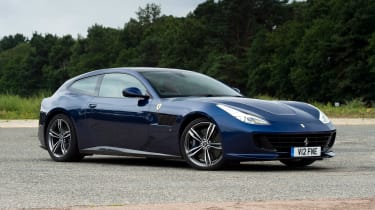 But this is a GT car, so it has to offer more than just cross-country pace. The comfort is there thanks to the switchable mode for the dampers, but so is the quality. The cabin is beautifully trimmed and there’s genuine space for four, even if the roofline is more shooting brake than SUV.

It’s not without its flaws, mind. Apple CarPlay is a £2,400 extra, which seems stingy on a £230,000 car when it comes fitted as standard on an Audi Q2 that costs a tenth of the price, but it does add to the fairly sophisticated infotainment system.

Ferraris have been lacking in this area compared to rivals in the past, but not the GTC4. The 10.25-inch screen is large and the display can be split to show more than one aspect of the system at once.

It’s fairly simple to use as well, and combined with the Lusso’s refined and relatively practical nature (don’t forget the 450-litre boot, hatchback tailgate, claimed 18.8mpg and 91-litre tank to help the cruising range) it makes this a genuinely usable four-seater if you’ve got the budget to afford it.

Let’s face it, not many have a £230k car budget, but for the lucky few who can climb into what is a niche market even for Ferrari, the GTC4 is fantastic. It has connectivity and infotainment tech to back up the innovations under its sleek but sizable body. It’d embarrass some seriously capable sports cars but offers plenty of comfort, and while Ferrari has improved all the little areas that elevate a car from good to great - not to mention the big strides it’s made with its chassis technology over recent years - when it comes down to it, this is still a V12-engined Ferrari, and it’s the connection with that engine that makes the experience.