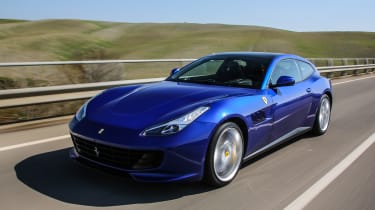 Fitting Ferrari’s fabulous twin-turbo V8 has done little to dent the GTC4 Lusso’s sense of occasion. It will happily howl to its 7,500rpm redline, while its playful chassis and sharp steering make it more of a sports car than a GT. But herein lies the problem: it can’t quite compete with a 488 GTB for agility, nor a V12-powered GTC4 Lusso for comfort or refinement. If you’re lucky enough to be in the market for a £200,000 Ferrari, then pick one or the other – not this mixture of the two.

Aimed at younger buyers, the Lusso T (for turbo, of course) is a rear-wheel-drive four-seater. Ferrari says it's a car for those who want a Ferrari for “daily use”, and in “mainly urban environments”.

It’s the first time Ferrari has offered more than one engine in a single model, too. Bosses insist this isn’t just another version of the GTC4, though; this Lusso T is in fact the sixth member of the current Ferarri family – sitting above the California T and 488 GTB – but below its 681bhp V12 sibling.

A single prod of the big, red, steering wheel-mounted starter button fires the 3.9-litre twin-turbo V8 into life with a ferile bark. A quick stab of the throttle allays any fears that this new GTC might have lost any of its sense of occasion, the engine rasping to 7,500rpm, then burbling consistently at idle. 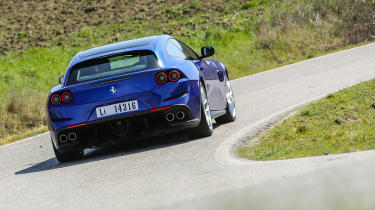 Despite Ferrari claiming that many GTC4 Lusso Ts will live in the city, what the car is like to drive will surely remain as high a priority for buyers as it is on any model with a prancing horse on its nose. Thankfully, by removing some cylinders and switching from four to rear-wheel drive, engineers have saved a considerable 55kg from the V12’s near-two-tonne kerbweight. The eight-cylinder car tips the scales at 1,865kg.

It’s certainly nimble enough; the super-sharp steering gives it an incredibly keen front end. The wheel isn't full of feel but the astounding levels of grip from the chassis allow you to push the car, reveling in the accurate and positive turn-in.

Ditching the front-driven axle has permitted Ferrari to move the engine back for a more favourable 46:54 rear weight bias. It works well, too, giving you a constant sensation of being pushed rather than being pulled. With the ESC systems off, the Lusso T will slither out of corners thanks to the brand’s clever Side Slip Control 3.0 (SSC3) setup. The new car retains the F12 tdf’s rear-wheel steer system, too, improving agility and giving the GTC the feeling of a car with a far shorter wheelbase.

Just like in the 488, any hint of turbo lag has been almost totally eliminated by Ferrari’s trick Variable Boost Management system, displaying instant throttle response throughout the rev range. On a twisting mountain road you could happily sit in third gear all the way up and all the way down, without shifting once. The seven-speed dual clutch gearbox isn’t as slick as a Porsche-produced PDK, but there’s a visceral feeling to it, one that’s only heightened by use of the GTC4's huge carbon fibre paddles. 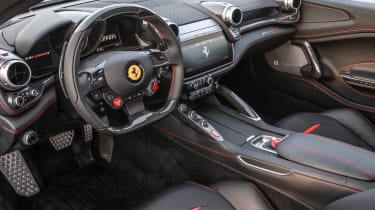 While the V8 loses out on raw horsepower (603bhp plays 681bhp), the turbocharged motor actually packs an extra 63Nm of torque. It’s not as relaxed or effortless as the V12, but it feels almost as quick; the Lusso T will sprint from 0-62mph in 3.5 seconds and hit 199mph flat out. That’s just one tenth slower and nine miles per hour shy of its more expensive stablemate.

However, where that sharp setup works well in the corners, the GTC4 Lusso T appears fidgety on the straight and narrow – especially along some of Italy’s most broken roads.

Around town, this new Lusso T belies its size, though, and never feels as large as its bulky dimensions would suggest. It’s easy to see past the long, sweeping bonnet, while the well-proportioned door mirrors allow you to squeeze through surprisingly tight gaps. The driving position is spot on, and while visibility out the back is as compromised as ever, the standard-fit reversing camera takes the strain away from any tricky manoeuvres. 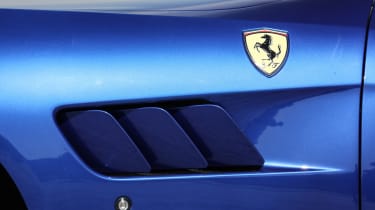 However, the compliant ride at low speeds worsens on the motorway – where the GTC4 Lusso’s Comfort setting doesn’t seem to soften the car’s reaction to bigger lumps and bumps. The car feels more fluid on smoother surfaces but this is unlikely to improve back in the UK, where we expect the wide-section front and rear tyres will show a tendency to tramline towards larger ruts and potholes.

Refinement is otherwise very good, and with the car in its default Comfort setting (switchable via Ferrari’s distinguished Mannetino toggle), the GTC4 Lusso T will cruise at 70-80mph without so much as a murmur from under the bonnet. Plant the throttle or push the car into Sport mode and the previously restrained V8 springs into action.

Despite all this performance, Ferrari claims a 32 per cent improvement in fuel economy and a 25 per cent drop in CO2 emissions. Of course, if you drive the Lusso T like your pants are on fire you’ll see your predicted range plummet, but at a steady cruise this is the first four-seat Ferrari capable of more than 20mpg.

Visually, the GTC4 Lusso T is almost indistinguishable from the existing car. Save for some new 20-inch wheels and a set of bespoke exhaust pipes, the V8 uses the same shell as the 12-cylinder car. Subtly revised over the old FF, the GTC uses revised lights front and rear, a reprofiled grille and fresh bumpers too. 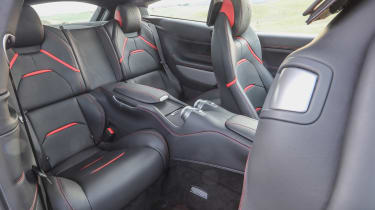 It’s a similar story inside, where the new version uses the existing car’s cabin without changes. That means the same responsive and intuitive 10.25-inch cental touchscreen, carbon fibre trim and leather-topped dashboard. The huge central rev counter sits right in your eye-line, while the gimmicky eight-inch passenger display remains, too, allowing your partner access to trip information, speed and nav instructions.

As it’s based on the same body, the Lusso T gets the same spacious interior as the non-turbo model – with room for two adults in the back and a couple of small suitcases in the boot. Ferrari claims a 450-litre load-bay, but the large step means you’ll need to be creative if you want to carry four people and their luggage for a long weekend away. The seats do fold, and there’s a standard-fit ski hatch for improved versatility.