Open-top LaFerrari Aperta is revealed in Paris, although limited-run roofless hypercar is already sold out 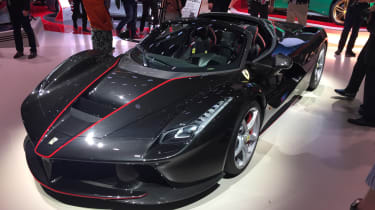 The new Ferrari LaFerrari Aperta has been revealed at the Paris Motor Show to mark the company's 70th anniversary. While Ferrari CEO Sergio Marchionne confirmed the existence of an open-top version of Ferrari's hybrid hypercar in an interview with Automobile magazine a few months ago, only now has the name Aperta - Italian for open - been officially announced.

The LaFerrari Aperta is aimed at clients and collectors who "refuse to compromise on the joy of al fresco driving", and a small production run of 150 cars was confirmed earlier in the year. However, if you want one, you're already too late. A Ferrari spokesperson said: "All available examples have already been sold after a special preview to clients, and the order book is closed." 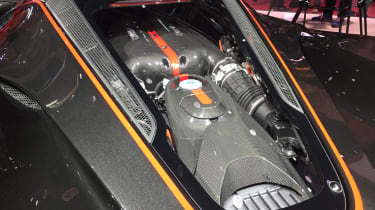 The car on show in Paris featured deep black paint with red pinstripes on the bonnet and bumpers. The theme continued inside, with an all-black interior complemented by red accents on the seats. Thanks to the car's bespoke nature, we're sure that no two Apertas will be alike, although the high-tech dashboard and complex F1-style steering wheel are carried over largely unchanged from the coupe model.

Removing the roof has done very little to affect the car's styling, with the same steeply raked windscreen and raised rear haunches. And Ferrari's engineers have maintained the cars rigidity, so the Aperta should eliver the same handling as the hard-top car.

Under the skin, the Aperta uses the same mid-mounted 6.3-litre V12 engine and KERS system as the coupe – producing 950bhp. It has the same performance figures, too, with a top speed of over 220mph and a 0-62mph time of less than three seconds. 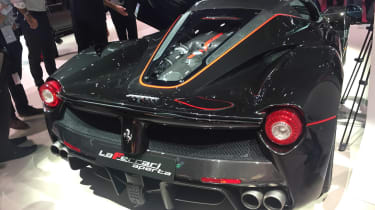 The Aperta gets two roof options thrown in - a temporary fabric roof and a carbon fibre hard top - while a sophisticated wind stop system is designed to reduce buffeting when driving at speed.

The LaFerrari Aperta is 4,702mm long and 1,992mm wide, with a 2,650mm wheelbase, while active aerodynamics such as a flexible front diffuser and underbody vanes, as well as an active rear spoiler and diffuser, will deliver razor-sharp handling.

As for price, that's largely irrelevant because all 150 Apertas are already sold. Buyers are likely to have shelled out significantly more than the £1million for the LaFerrari coupe though, as 499 of those were built.

Do you think the La Ferrari Aperta is better looking than the coupe? Let us know in the comments below...