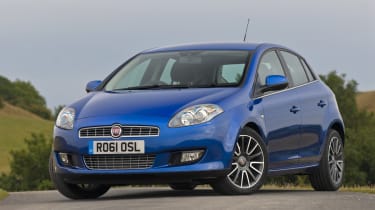 The Fiat Bravo is a fairly old model now, having launched in 2007. And in a market as intensely competitive as the family hatchback class, you’d think that would spell big trouble. It’s up against some of the biggest names in motoring – the likes of the Volkswagen Golf, Ford Focus and Peugeot 308 – all of which are a lot newer than the Fiat. And yet the Bravo is far from looking dated or at all out of place amongst such illustrious company. It’s a testament to Fiat’s design flair that even six years after launch, its family hatch still looks stylish and fresh and can – in the looks department, at least – hold its own against rivals. Unfortunately, the same can’t be said for its on-road performance. The engines are generally good, offering a reasonable mix of performance and efficiency – although, due to the car’s age, they are some way away from offering class-leading economy. But elsewhere, it disappoints. The steering lacks feeling, which is fine for town driving but means it lacks the kind of driver involvement that characterises the most accomplished cars in this class, and the ride is also on the firm side. The Bravo also offers a mixed bag when it comes to practicality, with a spacious boot but not much legroom for rear passengers. All in all the Fiat is a compromised machine – it’s stylish and good value for money, but elsewhere it is only ever adequate in a class packed with cars that can offer a whole lot more for a little extra money.

There are three engines available with the Bravo: two petrol units and a diesel. The entry level petrol is a 90bhp 1.4-litre 16v available in Active or Dynamic trim. It’s cheap, but it has the worst emissions and economy in the line-up, and it also lacks punch – so it’s not much use for anything other than short trips in town. The 1.4 MultiAir petrol unit is better – it offers 138bhp, emissions of 132g/km CO2 – 14g/km less than the lower-powered petrol engine – and does 50mpg. But the diesel is most efficient powerplant in the range. The 1.6 Multijet offers 104bhp, 115g/km CO2 emissions and 64.2 mpg. It is perfectly capable and offers the best blend of performance and economy. Unfortunately, the steering is very light. This makes the car easy to drive around town but also means it doesn’t have a very dynamic driving experience – it’s competent rather than exciting. Not that you’ll be tempted to push the Bravo too hard, as there’s a lot of body roll, so corners need to be dealt with sensibly. The ride is also a little on the firm side – you’ll find it a little jittery over anything but the smoothest tarmac. The Bravo is refined, though, it’s quiet even at motorway speeds.

While the petrol models aren’t particularly efficient, the Multijet diesel offers low emissions and decent economy at 64mpg. All three are in low insurance groups, too. Fiat dealers operate a menu pricing deal for servicing, which guarantees costs and charges, so you know what to expect and can keep your annual bills to a minimum. The Bravo’s list price is lower than most rivals and it comes with a decent array of equipment, so you get a good deal for your money. Dynamic and Sport models come with Fiat’s Blue&Me hands-free and USB audio system. But the real sticking point when it comes to running costs is the poor residuals. Bravos lose their value pretty quickly, so if you’re keen to buy one, it may be best to look at a nearly-new ex-demo model, to try and take the sting out of the falling value.

There is no mistaking where the Bravo’s strengths lie – its sleek Italian looks. It’s a well-proportioned hatch that looks good from any angle, with a raising waistline giving it a purposeful, sporty stance. The front end is a little understated compared to many of its newer rivals, which often favour huge gaping grills and aggressive, angular headlights that sweep back almost as far as the windscreen. But the Bravo’s simpler, curvaceous design is no less attractive for being different. It’s put together well, too, with tight shut lines and solid build quality. Entry-level Active models get steel wheels with plastic trims, which take away from the looks somewhat, but body-coloured mirrors are standard across the range. The range-topping Sport gets a chrome exhaust pipe, a rear spoiler and body-coloured side skirts. Dynamic models get chrome door handles. Higher spec models also boast cabins with upmarket features like climate control and leather trim on the wheel and gearlever.

Every Fiat Bravo gets a height adjustable driver's seat, while Dynamic and Sport trims get lumbar support as well. But the driving position is still a little cramped compared to class leaders. Rear passenger space isn’t great either, with limited headroom. But there’s a decent amount of cabin stowage and the Fiat’s 365-litre boot capacity is 15 litres up on the Volkswagen Golf. If you tumble the standard split/fold rear seats volume increases to 1,175 litres. A space saver spare wheel is standard across the range. Practical accessories like luggage retaining nets, a dog separation grille, tow bar and roof bars all feature on the options list.

The Fiat Bravo hasn’t been crash tested by Euro NCAP since it was launched in 2007, when it received a five star rating for adult protection, three stars for child protection and two stars for pedestrian protection. However, Euro NCAP has made a lot of changes to its testing criteria since then – and made the tests stricter – so it is difficult to compare the Bravo to models that have been rated more recently. All models get side and window airbags as standard, and parents will be reassured to know that child seat-friendly front passenger airbag deactivation and ISOFIX points are standard across the range. Stability control is also standard, and includes hill hold assist. In the back, all trim levels get three head rests, but rear seatbelts with pretensioners and load limiters are optional on Dynamic and Sport models and not available with Active trim. The Fiat Bravo failed to crack the Top 100 in our Driver Power 2013 satisfaction survey – although it didn’t receive enough votes to qualify for inclusion, so this isn’t necessarily a reflection on customers’ dissatisfaction with their car. Fiat, however, could only manage 30th place out of 32 in the manufacturer chart. The firm offers a three year warranty and an eight-year anti corrosion warranty, plus any genuine Fiat parts fitted in a repair are guaranteed for 12 months. 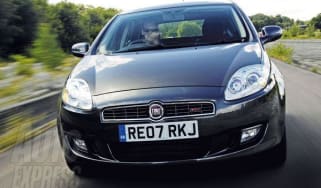 In the face of stiff competition from the Honda Civic and Ford Focus, the Fiat Bravo has gone almost unnoticed. However, that doesn’t mean the capable…
Fiat Bravo Eco 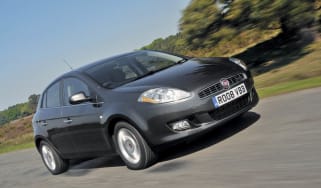 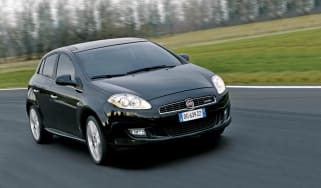 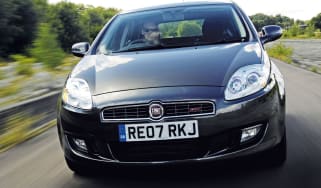 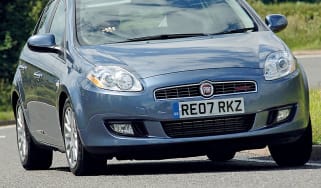 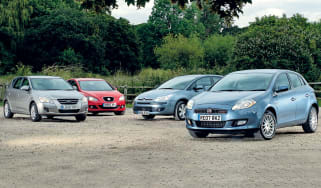 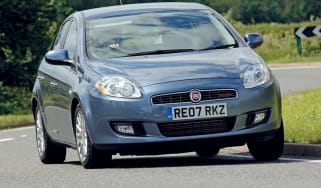 With a combination of good looks, impressive pace and well-furnished cabin, the 500 is a sure-fire hit.
Fiat Bravo 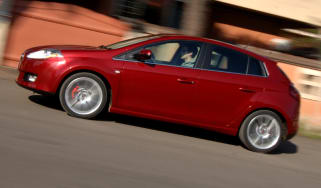 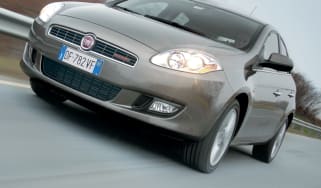