Are Multipla sales about to Multiply? The Italian firm's compact MPV has always been one of the best people carriers around in terms of packaging, but buyers were put off by its madcap looks. Now it has been given a welcome facelift. 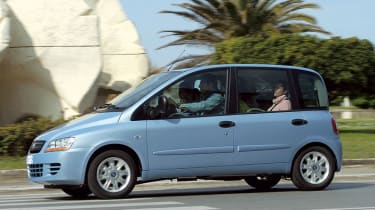 The only thing Fiat has changed on the Multipla is the styling - and arguably, that's all it needed to do. This remains an extremely flexible vehicle which is truly multiple - or Multipla - purpose! The spacious, funky-looking interior is refreshing and 1.9-litre JTD engine a refined option.

Are Multipla sales about to Multiply? The Italian firm's compact MPV has always been one of the best people carriers around in terms of packaging, but buyers were put off by its madcap looks. Now it has been given a welcome facelift.

The main differences are at the front, where the bonnet has been reprofiled to meet the base of the windscreen. Gone are the wacky pod-style headlights, replaced by units that are identical to those on the firm's smaller Idea.

New body-coloured bumpers, sills and side mouldings are added, all creating a cleaner look designed to accentuate the huge glass area. The rear also features new lights, plus a wraparound bumper, giving it a more sophisticated, less quirky appearance.

Inside, little has changed. The three- abreast seats are multi-adjustable, and it's surprisingly easy to access the centre front chair - it also folds into a table, while those in the back recline. The middle rear seat slides, too, offering extra space for passengers in the back.

It's very roomy, and the deep glass area gives a light and airy feel, as well as a wonderful view. However, it's best to avoid the optional twin sunroofs if adults in the back want headroom.

There are three new trim levels; Dynamic replaces the basic SX, Eleganza supersedes ELX and a new line, Dynamic Plus, sits between the two. All Multiplas come with ABS, twin airbags, a CD player and electric windows, with Dynamic Plus adding climate control, side airbags and an alarm.

Meanwhile, the Eleganza brings in window airbags, alloys, parking sensors and electric rear windows, too. A Bluetooth mobile phone hands-free kit will be available as an option, meaning calls can be received through the car stereo, with no wires or add-on holsters.

Overall, build quality is fairly good, even if some plastics are below par in places. Some switches are also ugly, while the electric mirror control, mounted on the roof above the driver, is odd.

There will still be only two engines on offer, both the same as pre-facelift models. The 1.6-litre petrol needs plenty of revs, and becomes intrusive above 5,000rpm, without giving much punch.

By far the better option is the 1.9-litre JTD diesel, expected to account for around three-quarters of UK sales. With 115bhp, it feels lively around town from little more than tickover, and is a very smooth and refined unit. Only on motorways does it fall down; it revs too high and is a little loud. The addition of a sixth gear would be useful.

Accurate, well weighted steering is a bonus, and the MPV can be threaded along tricky roads easily. Body roll is well controlled, too, so the Fiat doesn't lurch between corners, while the broad track means stability is confidence inspiring.

The Mutlipla is wider than many rivals, but you'll only notice this in the first few miles of driving. Because visibility is so good and you can see all four corners of the car from the driver's seat, it's rarely an issue. However, the ride isn't up to Renault Scenic standards, proving a little lumpy in town and restless at speed.

Prices are yet to be confirmed, but when the Multipla goes on sale in late August, the entry-level version should cost around £13,000 - similar to the current model - while increments of £1,000 can be expected between trim levels. It's an intriguing alternative to a Citroen Picasso, but the looks will still be its biggest barrier to success.