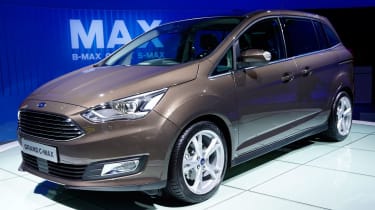 Just as Ford has updated the S-MAX, Focus and Focus Estate, it’s now overhauled the C-MAX and Grand C-MAX.

The compact five and seven-seat MPVs are based on the same platform as the Focus and get similar visual and mechanical upgrades. That means a new chrome trapezoidal grille and a set of more sculpted headlights. Ford has also moved the washer jets to underneath the windscreen to help clean up the lines a bit.

At the rear, the tail-lights have been redesigned, and the bootlid is smoother. There are two new exterior colours available for both cars, too: a brown-grey Caribou paint (seen on the Grand C-MAX) and Red Rush, which has been applied to the C-MAX in our pictures. 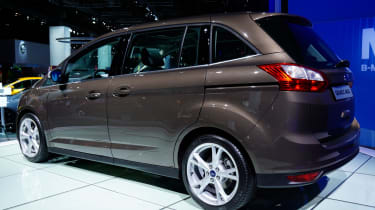 The interior gets the same simplified layout as the Focus, centred around a new eight-inch colour touchscreen. This now controls much of the infotainment, which has allowed Ford to get rid of many of the small, confusing buttons from the outgoing C-MAX. There’s a new SYNC 2 system available as well – this brings with it a greater use of voice commands.

Drivers can adjust the cabin temperature or even simply say “I’m hungry” to find out where the nearest restaurants are.

A redesigned centre storage console offers more space, while Ford has increased the capacity of the upper storage space in the dashboard. There’s a new USB connection for charging your phone, too. 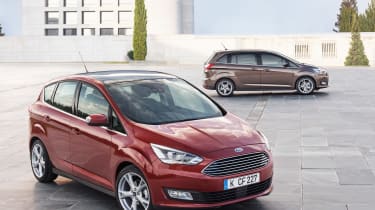 Engine updates follow those applied to the Focus, so there are new 1.5-litre TDCi diesel and 1.5 EcoBoost petrol models, offering the same power as the outgoing 1.6-litre units, but with improvements to fuel economy.

Ford has said that the 1.0-litre EcoBoost will continue to be offered, and can return 99g/km in the five-seat C-MAX – down from 117g/km in the current model.

Sales of the new models begin early next year, and following the lead of the Focus, Ford will want to retain the C-MAX’s £17,650 starting price.