The next-generation Ford S-MAX gets an all-new platform and £24,545 pricetag, and Ford bosses have revealed details of new tech 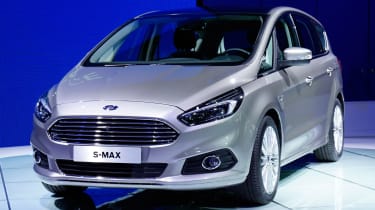 Ford revealed its all-new seven-seat S-MAX MPV at last year's Paris Motor Show, and it's set for release in the UK this summer. It gets a modular platform borrowed from the new Mondeo, advanced new tech and even more practicality. Ford design and engineering bosses talked us through the new model on a live video preview.

Previewed by the near-production ready S-MAX Concept at the end of 2014, the newcomer takes on board many of the styling cues seen on the facelifted Fiesta and Focus models, including the chrome trapezoidal grille and sculpted headlights. Although not radically different from the previous S-MAX, Ford design boss Claudio Messale says there is a specific reason behind this: 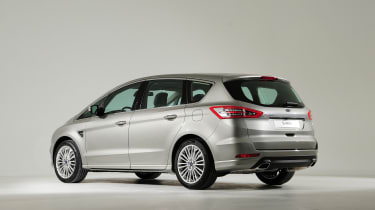 "We wanted to maintain a similar glass area as it was a successful design element our previous S-MAX customers liked". Claudio highlights that the research conducted with both previous buyers of the MPV and unrelated members of the public showed that the design and profile of the current car (launched in 2006 and facelifted in 2010) didn't require a radical rethink.

As well as the updated design there's neat design features, such as full-LED adaptive headlamps that can swivel and even switch off individual LEDs to break the beam and reduce glare for oncoming occupants. The rear lights are also LED, while there's a neat diffuser-style bumper with integrated exhausts.

It’s roughly the same size as the old car but now boasts more practical features, like individually power-folding seats in the second and third rows – Ford says that’s a segment-first. The second row can be dragged forwards with one hand, and when folded there is a completely flat loadbay. What’s more, Ford has made the S-MAX safer for those in the second row of seats, thanks to new side airbags. A hands-free tailgate is also added, allowing owners to wave their foot underneath the bumper to open the boot.

Chief Program Engineer Rolf Deges also talked through a new-to-Ford system called 'Intelligent Speed Assist'. It uses a front-mounted camera that can read road signs and information from the satnav to determine when a change in speed is coming up (such as a 50 into a 40mph zone), and when activated can automatically slow the S-MAX to that speed. Rolf insists the system "can always be overriden" for those who dislike that kind of control.

As for keeping all the occupants comfortable, Ford has added a few more segment-firsts to the S-MAX. The steering column can now be electrically adjusted and buyers can even opt for heated and cooled multi-contour massage seats. An electronic parking brake allows extra storage compartments, and the rear air vents are mounted on the roof to free up space. 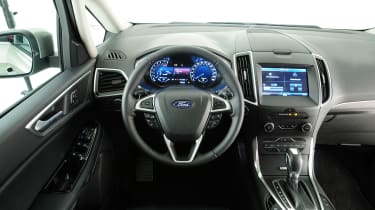 Safety is boosted by a range of technologies, such as a new-generation active parking system that can now drive in to perpendicular parking spaces as well as parallel spots. The system can also help you reverse out again by warning of crossing traffic, while a front- mounted '180-degree' camera displays a left and right view on the screen to help out at oblique junctions. Lane-keeping assist, blind spot monitoring and automatic braking are also among the suite of safety options.

Based on the next-generation Mondeo platform – due later this year – the S-MAX is hoping to uphold its reputation as the sharpest MPV in its class. To that end a brand-new Adaptive Steering system is available, which changes the quickness of the steering rack depending on speed using mechanical gearing and an electric motor mounted in the rack. It makes it more manouverable at low speeds and more stable at high speeds. 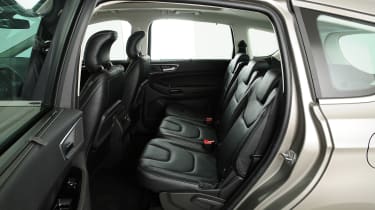 It'll even come with the option of intelligent all-wheel drive, which detects a change in road condition every 16 milliseconds and sends power to individual rear wheels when required. The new seven-seat MPV will go on sale in summer of 2015 priced at around £24,545.

Now check out our round-up of the best MPVs currently on sale... 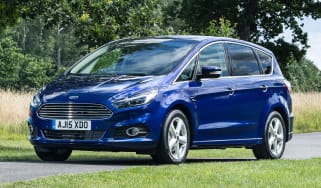 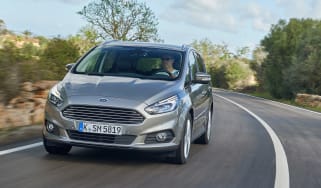