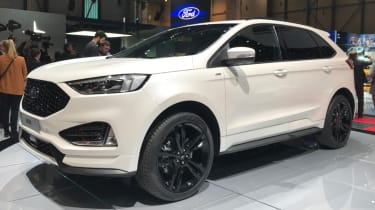 The facelifted Ford Edge will get a twin-turbocharged diesel engine for the first time when it arrives towards the end of 2018. In a move that goes against the current trend against diesel power, the new Edge SUV will not be offered with a petrol option at all, it has emerged.

Ford also confirmed that Europe, including the UK, will get an ST-Line trim level on the facelifted car. This follows the revised Ford Edge's debut at January's Detroit Auto Show and appearance at the 2018 Geneva Motor Show. The Detroit show confirmed that, while British buyers will be able to buy the sporty looks of the faster version in ST-Line guise, they won't get access to the 335bhp V6 petrol engine that powers the ST.

The new diesel motor that will be on offer here is a 2.0-litre, four-cylinder twin-turbo unit, badged EcoBlue and producing 235bhp. Ford has declined to issue fuel consumption or performance figures, but the manufacturer confirms that the unit is compatible with Euro 6 emissions rules and claims that the mix of a smaller turbo for low revs and a larger unit for higher engine speeds will help to deliver the fuel efficiency of a smaller engine capacity. 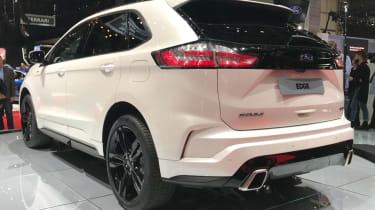 The single-turbo EcoBlue unit from the current car is still being offered in the revised Edge, in two different states of tune. There’s a 187bhp version, paired with a six-speed manual gearbox and all-wheel drive, and a 148bhp edition that comes with front-wheel drive and Ford's latest eight-speed automatic transmission.

Interestingly, despite the current backlash against diesel cars, there will not be a Ford Edge petrol edition available in Europe. Even though the Edge is heavily influenced by the demands of the North American market and built in Canada.

The new ST-Line trim delivers tweaks to the front and rear styling, 20in alloy wheels as standard, and gloss black finish on the upper front grille. 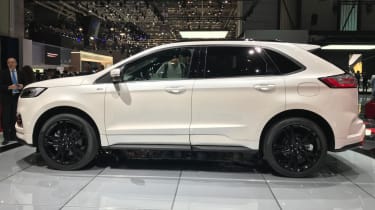 Inside, there are part-leather seats with 10-way power adjustment in the front, aluminium pedals, a perforated leather steering wheel and Ford's SYNC 3 infotainment system, which includes Android Auto and Apple CarPlay compatibility. There's also a fully digital instrument cluster that can be tweaked according to the preferences of the driver - everything from prioritising certain information to choosing from one of seven colour schemes.

The revised Edge gets a raft of extra safety kit - camera- and sensor-based systems that include post-collision braking, evasive steering assist and adaptive cruise control with stop-and-go and lane centring assist. 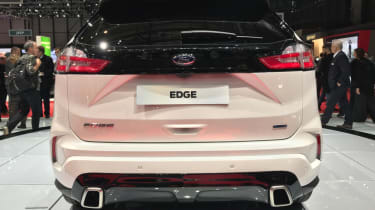 The ST-Line Edge will sit alongside two other trim levels in the UK line-up; there will also be a Titanium spec, along with a more luxurious Vignale version that brings customer service benefits as well as greater scope for personalisation.

There's no word yet on pricing, and Ford sources say the revised Edge won't actually arrive in UK showrooms until late autumn at the earliest.