The Ford Fiesta ST is our favourite junior hot hatch, but does the new Performance Edition make the driving experience even better? 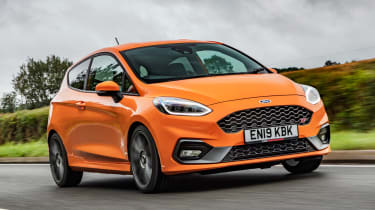 If you can justify the price – and value the extra kit and exclusivity – then the Fiesta ST Performance Edition could be for you. However, most buyers will be better off with an ST-3 model. The upgrades here are good, but the improvements are subtle, and the base car’s level of ability is so high that a standard model would be just as good, almost as much of the time.

The Ford Fiesta ST is the best car in its class. But the firm wasn’t content with that, so it’s enhanced what its junior hot hatch offers with this very bright Fiesta ST Performance Edition.

Orange is the only colour available, and alongside the new paint job this even-hotter ST benefits from a new suspension set-up and lighter alloy wheels, which save 7kg from the car’s kerbweight.

Every car also gets the Performance pack fitted as standard, adding a Quaife limited-slip differential, launch control, and a shift light. These extras command a £4,045 premium on top of the flagship Fiesta ST-3’s £22,450 price tag. 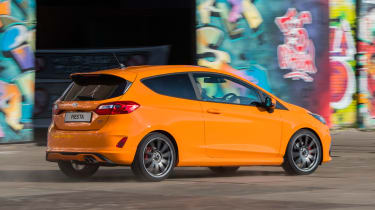 That might sound like a lot, but factor in that the Performance Pack and metallic paint usually cost £925 and £750 respectively on the standard ST-3, and it’s a little more bearable – and that’s before you get to the suspension. Plus there’s exclusivity here, as the Performance Edition is limited to just 600 units.

The car’s new coilover suspension reduces the ride height by 15mm at the front and 10mm at the rear and offers manual adjustment, so you can tailor the set-up to your chosen road or track. On that subject, the Performance Edition was calibrated by Ford Performance at the Nurburgring Nordschleife in Germany.

The handling is still as good as it ever was. The suspension upgrade is noticeable; it’s improvement in controlling the wheel movement no doubt helped by the reduction in unsprung mass brought by those satin grey 18-inch multi-spoke wheels.

It’s also as firm as it ever was, but that rawness gives the ST its character, and the incremental improvement in the quality of the damping is noticeable. We’re sure this would come into its own on a dry, twisty stretch of tarmac, but our soaking wet test route meant we couldn’t quite exploit the car’s extra ability. It did let us revel in the ST’s trademark adjustability, however.

The ST Performance Edition is brilliant fun to drive, tucking into roundabouts with confidence and precision thanks to the fast steering, and a chassis that responds to a lift of the throttle or a brush of the brakes. 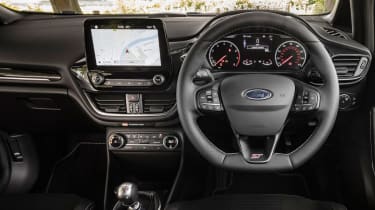 There’s no more power, so the 1.5-litre three-cylinder turbo engine still makes 197bhp and 290Nm of torque for a 0-62mph time of 6.5 seconds. It still punches hard in the mid range and runs out of puff higher up, but the gruff three-pot soundtrack is as characterful as ever, woofling on the overrun with a few burbling pops.

Efficiency is the same (40.4mpg and 136g/km CO2), too, and practicality is unaffected. The 311-litre boot is usable, but access to the rear is hampered by the three-door-only body for the Performance Edition.

The kit you get is the same as on ST-3 spec, so you benefit from sat-nav, smartphone connectivity, keyless go, heated Recaro seats and a heated steering wheel, as well as dual-zone climate control.