The Anniversary edition comes with £1,400 of extra kit, but after that, there's not much difference to the regular Zetec 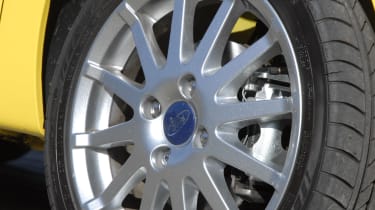 Ford is building only 400 examples of the Anniversary Zetec S, and each gets £1,400 worth of extra kit. With a price premium of £1,000 over the standard car it looks good value, but the ordinary model is a great supermini. So, unless you really want the rather dubious styling additions, you're better off going for a regular Zetec S. Even if you add leather trim, plus the useful MP3 connection, you'll still be better off to the tune of £480!

The nation's favourite supermini has just turned 30! And to celebrate, Ford has come up with this - the Fiesta Zetec S Anniversary. With a unique paint job, a flashy chequered flag on the roof and a numbered plaque on the dashboard, it has everything you would expect from one of the blue oval's special editions.

However, such variants usually fall into one of two camps - the great-value no-brainer or the expensive letdown. So, which is this little Ford?

The newcomer costs £1,000 more than the standard 1.6-litre Zetec S, and it doesn't take long to spot where the money has been spent. Most of the Anniversary's extra kit is obvious from a distance, and if you fail to notice the bright yellow paintjob, its chequered-flag roof decal will ensure you spot it in the car park. The contrasting black rear spoiler, mirrors, rubbing strips and door handles are equally head-turning.

Open the door and there are more surprises inside, with smart leather upholstery and an MP3 socket beside the gearlever. Mind you, the numbered plastic plaque mounted between the air vents on the centre console looks like an afterthought.

The chequered theme of the exterior is continued with the interior, too, thanks to matching scuff plates on the sills and black and white edging on the bespoke, velour footmats. Mean-looking privacy glass for the rear windows completes the list of extra kit available, and the eye-catching overall result certainly isn't for shrinking violets!

Wisely, Ford has decided not to tinker with the standard engine and suspension settings. That means the Anniversary model is just as much fun to drive as the normal car, with precise steering and peppy performance from the 98bhp 1.6-litre motor.

Fuel economy is good, at 43mpg, while the five-speed manual gearbox offers slick shifts and evenly spaced ratios which make best use of the model's even power delivery.

Against younger rivals, the cabin is beginning to feel its age, but on a twisty road the Ford is still one of the best-handling superminis money can buy. However, we'd like a tall sixth gear ratio to boost refinement on long motorway journeys.

Whether or not you view the Anniversary as good value will depend on your cosmetic preference so, all things considered, the chequered-flag Fiesta sits on the special-edition fence. While it isn't the bargain of the century, for those who want to stand out from the crowd, Ford's 30-year celebration supermini should do the trick.