Sporty Fiesta Zetec S is a great choice for those who want a fun drive but can't stretch to an ST. 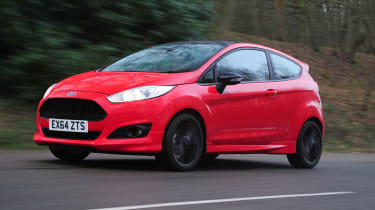 Ford's best-selling Fiesta supermini is available with a wide variety of trims and engines to suit all needs, and the Ford Fiesta Zetec S has a specific target audience in mind. It's designed for younger buyers who want a sporty look and feel without the high running costs and insurance associated with the ST hot hatch.

The Zetec S Fiesta is available with Ford's 1.6 TDCI diesel in 94bhp form, or the excellent 1.0-litre EcoBoost turbo petrol with 123bhp. The diesel is perfectly adequate, managing 0-62mph in 12.9 seconds and an impressive 85.6mpg. The EcoBoost would be our choice, as it still claims 65.7mpg and gets free road tax but is very punchy and manages 0-62mph in 9.4 seconds. 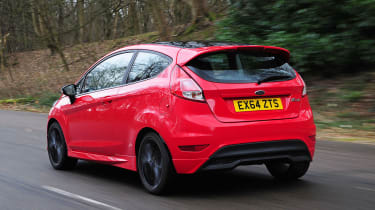 To help it stand out the Zetec S gets a number of sporty touches that make it similar in appearance to the fully-fledged ST. 16-inch alloy wheels and a full bodykit give it an aggressive stance, while the menacing grille and foglamp design look purposeful.

Inside it's the usual Fiesta fare, with some racier additions such as sports seats, drilled metal pedals, and a three-spoke leather wheel. Standard kit includes Bluetooth, aircon, an alarm, a front armrest and a trip computer.

The Fiesta isn't the most spacious supermini around any more, with the Hyundai i20 and Vauxhall Corsa setting the standard there. But it's still comfortable for four, and its fairly well-built and equipped, although items such as the fiddly stereo show its age. 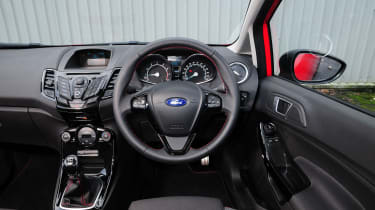 To drive the Fiesta is still one of (if not the) best in the business, with a brilliant ride and handling balance as yet unmatched with any car. The Zetec S gets firmer suspension which makes it fantastic fun on a twisty road, but some may prefer the softer and less intrusive ride quality of the standard car. It's very well damped and refined, though, and much less harsh than the ST.

Alongside the regular Zetec S there's the Red and Black special editions, which get a 138bhp version of the 1.0-litre EcoBoost engine and colour-themed styling tweaks.