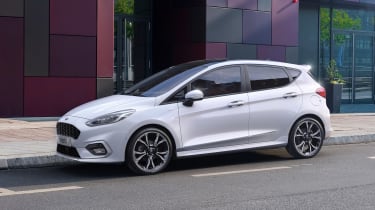 Ford has launched a pair of new 48-volt mild-hybrid engines for the Fiesta. They’re the same hybrid powertrains found in the Ford Puma crossover – and Ford says they can reduce the Fiesta’s WLTP fuel consumption figures by around five per cent. Prices start from £19,860 for the lesser powered variant in Ford’s mid-range Titanium trim-level.

Both Ford Fiesta EcoBoost Hybrid powertrains use a turbocharged 1.0-litre three-cylinder petrol engine already found across the Fiesta and Puma range. However, they feature a small lithium-ion battery pack and a belt-driven integrated starter-generator, which adds an extra 20Nm of torque and helps mitigate turbo lag.

The electric motor is fitted alongside an energy recovery system on the brakes, which reclaims energy that would otherwise be lost when decelerating. The electricity generated by the motor can then be redeployed to assist the petrol engine when accelerating or used to power the car’s electrical accessories. 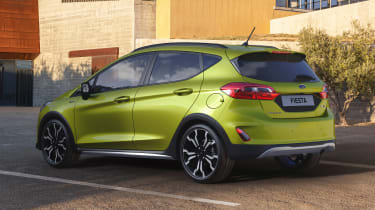 As in the Ford Puma, the Fiesta’s hybrid powertrains come with two different power outputs. The entry-level version produces 123bhp and 210Nm of torque, while the more potent model has an output of 153bhp and 240Nm of torque. Both engines are mated to a six-speed manual gearbox as standard.

The new MHEV powertrains are also around 15 percent more fuel efficient than the Fiesta’s outgoing 99bhp 1.0-litre three-cylinder EcoBoost engine – as both units feature cylinder deactivation, which allows the shut down one of the engine’s three-cylinders.

Alongside the new mild-hybrid powertrains, Ford has also fitted the Fiesta with traffic sign recognition and an adaptive cruise control system. On models fitted with Ford’s seven-speed dual-clutch automatic, the system will automatically adjust the Fiesta’s speed according to the speed limit, as well as control the vehicle’s accelerator and brakes in stop-start traffic.

Ford has updated the Fiesta’s interior, too, adding fresh graphics for the car’s SYNC 3 infotainment system and a new wireless smartphone charger. Ford has also relocated the subwoofer for the Fiesta’s optional Bang & Olufsen sound system to the rear wheel arch, to maximise the amount of available boot space.

What do you make of the Fiesta’s new mild-hybrid powertrain? Let us know in the comments section below…

The Fiesta is good fun and remains a solid buy, despite increasingly strong competition.
Mazda 2 vs Ford Fiesta

Small cars come in all kinds of shapes, if not sizes. Here we highlight the best new small cars on sale
Renault Clio vs Ford Fiesta vs SEAT Ibiza