Matt black paint, 345bhp and a limited run of 500 units - the most hardcore hot-hatch on the market just got even meaner 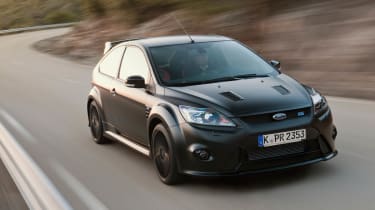 Just when you thought the 300bhp Focus RS was the pinnacle of hot-hatch lunacy, Ford has gone one better. Rather than looking like an aftermarket addition the matt paint job compliments the aggressive looks perfectly, while the engine punches harder and sounds even better than the standard car. What’s more the extra 45bhp hasn’t corrupted the RS’s polished handling. In fact the only downside to the most hardcore hatch on the market is that it’s already sold out.

Ford’s most iconic badge is back with a vengeance! First seen on the Sierra Cosworth that dominated saloon car racing back in the Eighties, the RS500 name has been resurrected – and this time it marks out the meanest-looking and most powerful Focus RS to date.

Made to mark the end of the standard RS’s production run, power from the already savage 2.5-litre turbocharged engine been cranked up from 300bhp to a colossal 345bhp. As the badge suggests only 500 examples will be sold, split between 20 countries, with just 101 cars allocated to the UK.

If the standard car’s swollen arches and feast of slashes and vents were a slap in the face, the RS500’s matt black bodywork and matching 19-inch alloys are a knockout punch. All 500 cars are painted in metallic Panther Black, before being wrapped in a stealth-like coating – which doubles up as protection against stone chips and scratches.

On the inside unique trim on the centre console, embossed with the RS logo, and a plaque registering your car’s place in the production run give a sense of occasion to what’s essentially a standard Focus interior. But as any Fast Ford fan will tell you, it’s what lies underneath that counts.

A larger intercooler, wider air filter and a freer flowing exhaust pipe, as well as an uprated fuel pump and an ECU tweak are all that’s required to liberate an extra 15 per cent horsepower, and trim the 0-62mph sprint from 5.9 to 5.6 seconds.

WATCH US HIT 165MPH ON THE GERMAN AUTOBAHN HERE.

At low revs it feels just as smooth and flexible as the standard RS, but once the counter sweeps past 2.5000rpm the engine really hits its stride. The induction and exhaust noise engulf the cabin, while it pops and bangs like a firework when you lift off the throttle.

Straight line acceleration is noticeably more frantic, but the punchy power delivery is entirely familiar from the standard car. The good news is that the extra shove hasn’t corrupted the handling. Despite all that power being sent to the front wheels, there’s remarkably little torque steer on smooth roads, while the front differential help the car claw its way out of bends and find more grip than you ever thought possible in a front-wheel drive hatch.

That’s the good news, now for the bad. Every RS500 has already been sold, even before a single customer has had a chance to drive one – a fact that speaks volumes about the RS500’s status as a future classic. But don’t despair, if you already own a Focus RS, Ford’s official tuning partner Mountune is offering the full suite of RS500 engine upgrades for £2,195 including fitting. All that’s left then is to apply a matt finish and a DIY RS500 is yours.

Rival: Renaulsport Megane 250 The balance the Megane strikes between fast and involving performance and day-to-day comfort is superb. It can’t match the Focus RS for bhp, but a 0-62mph time of 6.1 seconds is hot on its heels.