Our verdict on the hottest new Focus on sale now, the Zetec S with a 177bhp turbo petrol engine 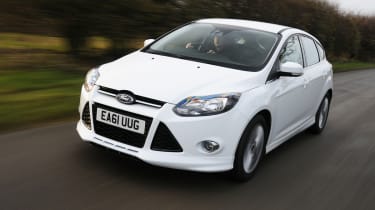 The Focus Zetec S is a great warm hatch – and definitely whets our appetite for the upcoming ST. The 177bhp 1.6-litre EcoBoost engine adds welcome performance to the Focus range. This is a very accomplished all-rounder that delivers an appealing blend of refinement, comfort and driver engagement. The only negative is the bodykit, which is at odds with this car’s grown-up personality.

This is the sportiest version of the new Ford Focus yet. The Zetec S has been developed specifically for the UK market, and combines racier styling with a 177bhp version of the 1.6-litre EcoBoost turbo petrol engine.
While serious hot hatch fans will wait for the much-anticipated 247bhp 2.0-litre turbo ST, which is due later next year, the Zetec S is an interesting stop-gap.
Video: watch CarBuyer's video review of the Ford Focus
[[{"type":"media","view_mode":"content_narrow","fid":"68652","attributes":{"alt":"","class":"media-image"}}]]
There’s a choice of 1.6 and 2.0-litre TDCi diesels, plus a normally aspirated 1.6-litre petrol – but this turbo EcoBoost version is the most powerful engine seen in the new Focus so far.
It’s refined throughout the rev range, throttle response is positive and power delivery is smooth and linear. The 240Nm torque output is unchanged from the less powerful 148bhp engine in the Titanium model, but the range-topper loves being worked hard and delivers spirited pace: 0-62mph takes only 7.9 seconds. Better still, there’s a throaty engine note above 4,000rpm.

Yet despite its performance upgrade, this Focus retains the impressively smooth stop-start system, regenerative braking and active grille shutter of other models, so it emits 139g/km of CO2. And Ford’s engineers have reworked the suspension, giving the car stiffer springs and shocks.
The ride height is unchanged, however, so the suspension is still supple enough to soak up rough road surfaces with ease and retain its composure at speed – it strikes an excellent balance between body control and ride comfort.
The well weighted steering delivers positive turn-in and plenty of feel, and there’s lots of grip. Add a slick-shifting six-speed manual box, and it’s hard to fault the driving experience.
Inside, the Zetec S has aluminium pedals and a DAB radio, while the £800 interior pack adds red part-leather upholstery and heated seats.
Our car also featured the £1,000 Driver Assistance Pack, which gives you city stop, blind spot warning, lane departure warning and sign recognition.
If only Ford had chosen a different bodykit. The lower side sills, chin spoiler, deeper rear bumper and tailgate wing look a bit like bolt-ons and won’t suit all tastes.
Nevertheless, the 177bhp EcoBoost Zetec S is one of the best MkIII Focuses we’ve driven.
Share this on TwitterShare this on FacebookEmail