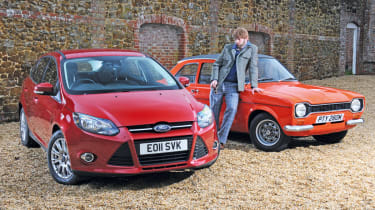 As a child in the seventies, I often wondered what the cars of the future would be like. Would they be intelligent, fuel-efficient capsules that guided themselves automatically along grid-like roads? Would they read danger signs and self-brake and self-steer? Might they have on-board computers, TV screens or even fly?

Nearly 40 years later, the answer to many of those questions, amazingly, is yes. If a badly dressed family man from 1974 time-travelled to the present day, he’d barely believe how his Escort Mexico has evolved into today’s Focus.

Both cars have Ford badges and a 1.6-litre engine, but that’s really where the similarities end. If our time-warp driver was to take a spin in the newer car, he would find that science fiction had become science fact.

I was lucky enough to drive the Escort at a celebration of GEM Insurance’s 80th birthday, and I was amazed at how old-fashioned it felt. Once you get past the clunky gearshift, heavy steering and rubbish brakes, the rear-wheel-drive classic is hugely entertaining. But the thought of tackling a long motorway journey or congested cross-town commute brought me out in a sweat. Not so in the Focus.

Thanks to its responsive turbo, excellent refinement and light controls, the Focus is a breeze to drive. Factor in its classy, climate-controlled cabin and you realise how far cars have moved on in the last four decades. Yet it’s the hi-tech extras that would be the biggest shock to our Escort owner, who classed his Mexico’s analogue clock as cutting-edge.

Our range-topping Titanium is fitted with the £850 Driver Assistance Pack. That sounds expensive, but this brilliant extra is worth every penny, as it includes blind-spot monitoring, lane-departure warning, road- sign recognition and automatic main beam.

By far the best feature is the Active City Stop, which monitors the road ahead and stops the car automatically if it calculates you’re about to hit the vehicle in front. On two occasions, this clever kit has saved me.

It hasn’t all been plain sailing for the Focus. Although the ignition is keyless, you still need to fumble in your pocket for the fob to open the doors. And the thick windscreen and door pillars hamper visibility – the Escort’s vast expanses of glass make parking sensors and blind spot monitoring redundant.

I’ve been disappointed by the 1.6 EcoBoost’s 33.8mpg economy, while the tight 277-litre boot is only just big enough for my growing family. But the car has proven reliable, roomy and refined, while the engaging chassis and gutsy engine have made it fun to drive.

Still it’s the hi-tech kit that really impresses. Our seventies Escort driver’s head would be spinning at all the technology – although he’d be disappointed that the Focus couldn’t fly. Maybe Ford will address that on the MkIV!

“I agree with Darren that the Driver Assistance Pack is a great addition. However, the windscreen-mounted sensors do block your view ahead a little.”Paul Bond, Road tester

“I find the styling drab, and the dash buttons look as if they’ve been applied with a machine gun. This Focus isn’t as good to drive as the brilliant MkI, either.”NSanderson, via www.autoexpress.co.uk