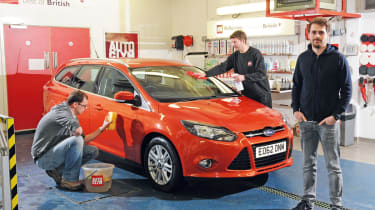 It’s tough trying to keep a car clean at this time of the year – especially if you cover as many miles a week as I do. Plus, with frequent swaps between test cars, my Ford Focus Estate was starting to look neglected, as I hadn’t found time to clean it. Instead of its original vivid Mars Red paint, the car had turned a dull shade of Motorway Brown.

So when car-care expert Autoglym offered to teach our products writer Jamie Fretwell the tricks of the valeting trade, it was an ideal opportunity to get the Focus looking like new again. And best of all, I wouldn’t even have to lift a finger to do it.

The process took Jamie six long, hard hours to complete in total, and covered everything from the wheelarches to the air vents. Autoglym uses an eight-point cleaning system, which starts with the wheels and ends with the windows. At the end, the Focus was left looking smarter than it did on the day we first got the keys.

I think colour is hugely important to how good a car looks. That’s why I’m so glad that Autoglym managed to get the optional Mars Red paintwork (£525) back to its former glory. Combined with the Focus’ 16-inch multispoke alloys, it really helps to show off what I think is a good-looking car.

Thankfully, the Ford’s talents are not just skin-deep. It has proven to be an excellent car for my needs, even when it’s caked in a layer of dirt. From the responsive 1.0-litre turbocharged petrol engine to the very effective windscreen wipers, there’s a lot to like about the compact estate.

One of my favourite features is the Sony media interface. I’m a huge music fan, and once you’ve become familiar with the Focus’ multitude of menus, it’s very easy to connect your smartphone and have your entire collection of tunes streaming wirelessly via Bluetooth or the optional USB connection.

The rear-view camera is another useful touch. It’s also part of the Sony multimedia package, and its wide-angle lens gives a clear view of the area behind the car. It means the lack of rear parking sensors isn’t an issue.

It’s not all good, though. I’ve deactivated the auto-dipping headlights, because they’re too slow to react and dazzle oncoming traffic. Another gripe is economy. I never expected to get close to the 55mpg official figure, but the Focus has nearly dipped below 40mpg.

The amount of motorway miles I’m doing probably doesn’t show the 1.0-litre turbo petrol engine in its best light – so if you’re thinking of buying a Focus Estate for long-distance use, the 1.6 TDCi diesel is definitely a better bet.

“I’ve been impressed with the 1.0-litre engine in town. But you need to work it hard to keep up with traffic out on the open road.”Graham Hope, Deputy editor

“I always find you need to be firmer on the pedal with smaller-capacity engines, undoing any potential fuel economy savings they might give.”Alexis, via www.autoexpress.co.uk