Ford and Domino's to deliver pizza in self-driving cars

A joint trial with Domino's will see pizza delivered to residents of Ann Arbor, Michigan in self-driving Ford cars 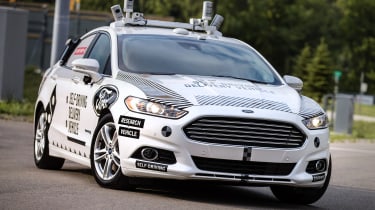 In the coming weeks, Domino's will offer randomly selected customers in Ann Arbor, Michigan the option to have their food delivered in an autonomous Ford Fusion Hybrid (equivalent to the Mondeo Hybrid in the UK).

The delivery/research vehicles will initially have a Ford engineer on board, with customers able to trace their delivery via a bespoke app. Once the car has arrived, customers will be sent a code to unlock the car’s doors and the locked pizza compartment inside the car.

Ford previously announced plans to begin production of self-driving cars by 2021 and has been testing the technology in cities like Ann Arbon already.

Curiously, a key question in the trial isn’t how to get the food to the customer’s door, but how to get the customer to come and pick up the food. Russell Weiner, president of Domino's USA said: “The majority of our questions are about the last 50 feet of the delivery experience. For instance, how will customers react to coming outside to get their food?

"We need to make sure the interface is clear and simple. We need to understand if a customer’s experience is different if the car is parked in the driveway versus next to the curb.”

Sherif Marakby, Ford vice president, autonomous and electric vehicles said: “As we increase our understanding of the business opportunity for self-driving vehicles to support the movement of people and goods, we’re pleased to have Domino’s join us in this important part of the development process.”

Would you like to have your next take-away delivered by an autonomous vehicle? Tell us in the comments below...