The latest Ford Mondeo is the most powerful diesel yet and a host of changes designed to take on premium rivals. 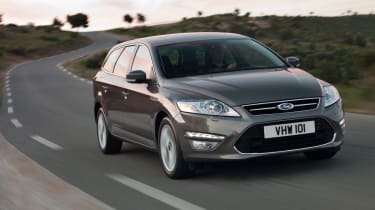 From the outside, you’ll be hard pushed to tell the new Mondeo from the previous car – the Audi-inspired LED running lights are the only giveaway. But under the skin, it’s all change. The 197bhp 2.2 TDCi is the most powerful Ford diesel ever, and it’s a peach. The car is still great to drive, so our only criticisms are the price and the fact there’s no PowerShift auto option. In every other respect, this is a genuine rival to entry models from the German big three.

The Mondeo is moving further upmarket! Three years after the new, more premium Ford family car went on sale, the facelifted model has landed. And it’s been upgraded inside and out, with revised engines under the bonnet.

We drove the range-topping diesel estate – the fastest oil-burner the firm has ever made. The 2.2-litre Duratorq TDCi has been modified to offer 197bhp – that’s 24bhp more than the unit it replaces – and it’s more efficient, too.

High-pressure fuel injectors, a larger turbocharger and an advanced cooling system mean it does 0-62mph in 8.3 seconds. This is eight tenths down on the 237bhp EcoBoost turbo petrol car we drove in Issue 1,131. It also returns 47mpg economy and emits 159g/km of CO2.

The Mondeo estate is big, however, tipping the scales at 1.615kg, so it never seems quite as fast as the figures suggest. That is partly down to superb refinement and noise isolation. But even so, it doesn’t feel significantly quicker than the 161bhp 2.0-litre TDCi.

Ford’s Driver Select Suspension system constantly monitors and adjusts the stiffness of the dampers, so on the move, the Mondeo delivers the best of both worlds: long-distance comfort and impressive body control through corners.

The highlight of the driving experience, though, is the steering. It’s light at low speeds, but direct and more weighty as the pace quickens, and a joy to use.

Although the six-speed manual has a precise, positive action, it’s a shame the 197bhp diesel can’t be twinned with Ford’s slick dual-clutch PowerShift gearbox – this is standard on the 200bhp and 237bhp EcoBoost models.

The upgrades to the styling build on the Mondeo’s good looks. Most notable is the addition of LED daytime running lights above the newly designed foglamps – standard on all Titanium models. A reprofiled bonnet, lower grille and rear bumper complete the tweaks.

Inside, there’s a fresh centre console and instrument panel, as well as LED interior lighting. Plus, the premium sound system incorporates 10 speakers, with a subwoofer mounted in the boot.

Three pieces of technology debut on the new car, and all aim to improve its considerable safety credentials. The Lane Departure warning system uses a camera to monitor the road ahead and alerts the driver – via a vibration through the steering wheel – when they stray from a lane.

There’s also a clever Driver Alert set-up, which gathers data from a camera and from the yaw movement of the car, to assess whether the driver is becoming tired. The results of this are shown in the cluster display.

Finally, Auto High Beam automatically illuminates as much of the road ahead as possible, and dips the lights when it senses an oncoming car. These innovations combine with Ford’s excellent blind spot warning system to make the Mondeo a very safe companion.

The cavernous estate, offering a maximum 1,740 litres of load space, carries a further £1,100 premium. But as capable as this new diesel is, we’d save the cash and go for the 163bhp 2.0 TDCi.

Rival: Insignia Tourer It can’t match the new Mondeo estate for space, as the 540-litre boot trails by 223 litres. But the Vauxhall is still a strong choice, with its generous kit, great prices and practical, attractive interior.