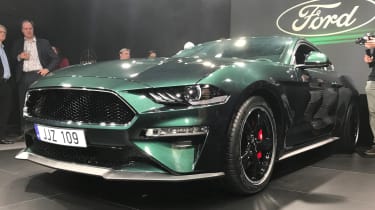 This is the Ford Mustang Bullitt: a special edition that marks the 50th anniversary of the Steve McQueen blockbuster movie of the same name. Revealed at the Detroit Motor Show in January, UK sales are confirmed from £47,145.

Taking the Mustang GT Fastback as a starting point, the Bullitt gets a tuned version of that car’s 5.0-litre V8. It now makes 458bhp - an increase of 14bhp - and 527Nm. Available only with a six-speed manual gearbox, it features a rev-matching function that blips the throttle for smoother downshifts. Ford claims the Mustang Bullitt can hit 163mph flat out – up from the regular car’s 155mph.

The Bullitt features a performance exhaust system as standard as well as the open air induction system and intake manifold from the Shelby GT350. Ford says this has been designed to give it a unique exhaust note.

From the outside, it stays true to the movie car with a Dark Highland Green paint scheme. It rides on 19-inch alloy wheels finished in black with a silver rim, while the Brembo brake calipers are painted red. Subtle chrome details around the grille and front windows, plus Bullit badging on the rear are a further nod to the 1968 original. 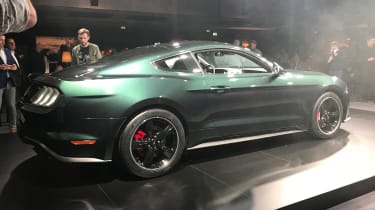 Inside, there’s a set of Recaro seats complete with green stitching, and an cue ball gear knob. An uprated 12-speaker, 1,000-Watt sound system produced by B&O Play is standard, and there’s the option to equip both adaptive dampers and an electronics pack that adds navigation and electric seats. The changes inside are rounded off with Bullitt scuff plates and an instrument panel badge with a unique chassis number.

First deliveries are expected in September, and order books will remain open until June 2019. For your first UK glimpse of the Bullitt in the metal, it’ll be making its first appearance at the American Speedfest show at Brands Hatch on 9 and 10 June.

What do you think of the Ford Mustang Bullitt? Let us know below...