Ford has finally unveiled its range-topping Mustang, with the legendary Shelby name, and released spec details 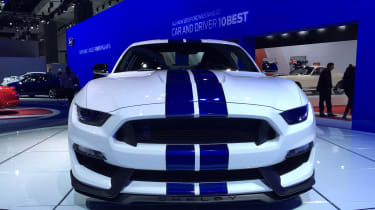 After months of teasers whetting the appetite of Mustang fans worldwide, Ford has finally unmasked the flagship Shelby-tuned model at the 2014 LA Motor Show. Called the GT350, it will take pride of place as the fastest official model in the range.

With the new Ford Mustang finally coming to the UK next year, the announcement of a Shelby version would surely increase interest further. It's unfortunate then that the hot GT350 is unlikely to reach our shores any time soon, according to Ford's British arm.

The most important change to the American muscle car concerns its 5.2-litre V8, which ditches its traditional supercharger in favour of high-revving natural aspiration. It uses a flat plane crankshaft – a first for any Ford V8 – to produce in excess of 500bhp and 540Nm of torque. 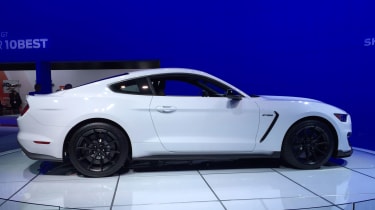 Power is sent to the road through a six-speed manual gearbox and a Torsen limited-slip differential, while larger Brembo brakes also feature. An optional Track Pack brings engine and transmission oil coolers for sustained high-speed action, as well as bespoke 19-inch wheels and an aluminium bonnet.

Styling changes for the Shelby include unique badging, a low front splitter, a carbon-fibre composite grille and a new rear diffuser. Inside, there are grippier Recaro sport seats, unique dials and a new five-mode drive control system.

Prices for the GT350 are yet to be confirmed, but expect at least $10,000 to be added to the standard 420bhp 5.0-litre V8 when it arrives in the US. Ford hasn't completely ruled out bringing the car to the UK, although the trend for downsizing here makes it very unlikely.

Do you think the Shelby should come to the UK in limited numbers? Let us know in the comments below.