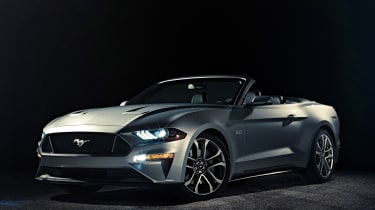 Just like on the coupe, the new drop-top Mustang sports a new front end with an altered front bumper and vents, plus new slimmer headlights and a slightly lower bonnet for a stooping nose.

The new Mustang gets a fresh set of C-shaped taillights, while the GT model has a revised rear diffuser. Performance Pack models get an eye-catching new boot lid spoiler too.

As part of the model update Ford has tweaked the two engine choices. The 2.3-litre Ecoboost four-cylinder engine remains the entry-level option, and like the 5.0-litre V8 GT model Ford has tweaked it to produce more power and torque, though we still haven’t received official figures.

The new Mustang ditches its six-speed automatic gearbox in favour of a new ten-speed box, though the six-speed manual – with one or two tweaks given the new torque figures - remains alongside. New shock absorbers plus MagneRide dampers make the options list, forming part of the Performance Package. 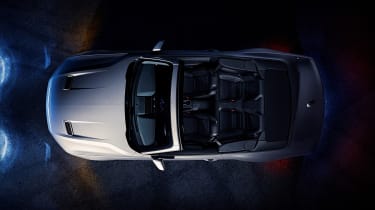 Prices and exact specifications for the new Mustang have yet to be confirmed, but we know the updated car will go on sale in the UK in early 2018.

What do you think about the new 2018 Mustang? Let us know in the comments below.