2018 Ford Mustang gets Level 2 Performance Pack, but only in the US

The Ford Mustang will benefit from wider tyres and stiffer suspension in the US, but UK customers may have to wait a little longer 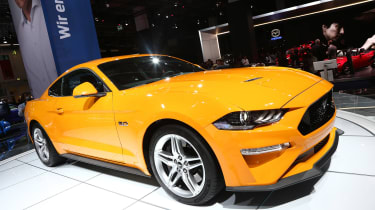 Ford has launched another Performance Pack for the 2018 Mustang GT that will only be released in the US market for now.

Another welcome edition to the US-exclusive Performance Pack Level 2 is MagneRide suspension and dampers for quicker steering calibration. Stiffer stabilisers and springs are more characteristics of the track-orientated Mustang that also receives a front splitter from the previous generation Boss 302 Laguna Seca model. 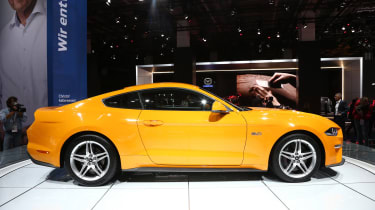 Ford revealed the updated Mustang in European spec at the Frankfurt Motor Show last month, which it says has been tuned to suit European tastes compared to the US spec version of the car.

But it’s expected to be faster and more frugal; Ford offers both motors with its new 10-speed auto, and despite the drop in power the firm says that the 2.3-litre Mustang is now more responsive under acceleration. A six-speed manual gearbox is still standard fit, but has also been updated. 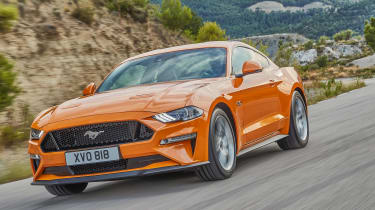 The fresh cabin has digital dials, plus there are new driver assist features and an active exhaust. Under the skin, new MagneRide suspension and selectable driving modes are set up specifically for European roads, while LED lights have also been introduced.

With its 2018 model year update, Ford has introduced a new look for its pony car alongside a power boost and new cabin technology.

The car’s headlights have also been tweaked. The new units are a similar shape, but slimmer and with distinctive new indicators. New thin, rectangular fog lamp clusters sit in the new front bumper.

Around the back a new rear spoiler sits atop the bootlid, it’s part of the Performance Pack. New C-shaped taillights sit in the familiar black housing stretching across the rear of the car. A new, lower black diffuser lies beneath the rear bumper, home to a duet or quartet of exhaust tips.

#Ford has updated the #Mustang! What do you think of the new look? Ford Mustang Ford Performance Ford UK Read more here: http://aex.ae/2jvKn4D

In terms of engines Ford will continue to offer the Mustang GT with two power units in the UK – the 5.0-litre V8 in the GT and the 2.3-litre four-cylinder Ecoboost in the entry level model.

The gearbox line-up has been changed too. The six-speed manual has been tweaked for optimal torque for both models, and on the V8 it gets a new dual-plate clutch. As rumoured, a new 10-speed automatic gearbox is now an option, replacing the six-speed auto complete with steering wheel mounted paddles.

The 2018 model year Mustang also gets new shock absorbers, and MagneRide dampers now make the options list as part of the Performance Package.

In the cabin the car’s interior remains the same, with the exception of a new optional extra in the infotainment department. A new 12-inch LCD digital instrument cluster is available with customisable layouts, replacing the traditional analogue dials.

A new MyMode function allows drivers to save their favourite driving setups, and semi-autonomous driver assists appear on the Mustang for the first time, including Pre Collision Assist with pedestrian detection, Lane Keeping Aid, Lane Keeping Alert plus a Driver Alert system. Adaptive cruise control is offered too. 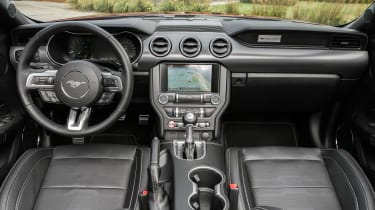 Also revealed at Frankfurt for the 2018 Mustang is a feature called 'Good Neighbour Mode'. The technology allows Mustang owners to choose what time they can fire their muscle car up to its full roaring potential and what time they can set it to start up quietly without complaints from neighbours.

The friendly feature can be accessed through the toggle menu in the instrument cluster. The idea is the brainchild of Ford employee Steve von Foerster, whose neighbours made constant complaints to him about his Mustang starting up in the morning.

Exact UK prices and specs for the new Mustang haven’t been revealed yet, but the updated car will go on sale in the UK in early 2018.

What do you think of the new Ford Mustang's looks? Let us know in the comments.