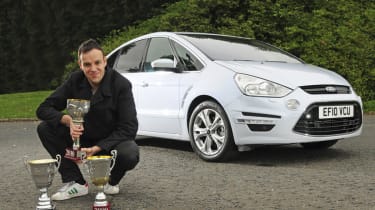 I’VE never been much of a prize guy. I once won an award for being top pupil academically at my secondary school. There were a couple of minor successes in golf competitions a few years ago. And Harry Ramsden’s in Manchester gave me a certificate in 1999 for eating a haddock the size of a whale.

As a roll of honour, it’s pretty ropey. But now the Hope household has taken delivery of a 100 per cent, bona fide award-winner in the shape of Ford’s S-MAX. Back in Issue 1,126, you may remember, it took the Best MPV prize in Auto Express’s Cars of the Year special – a feat it also achieved in 2008 and 2009.

So what’s all the fuss about? Well, first impressions have been very positive – despite some scare stories from my colleagues. Our road test team had all cast eyes on EF10 VCU before I did, and a couple were quick to warn me the colour “was an acquired taste”.

I seem to have acquired it pretty quickly. The £745 Ice White shade is best described as an ultra-pale whitey-silvery-blue, and I think it makes the freshly facelifted S-MAX look pretty distinctive. Coupled with the menacing blacked-out privacy windows, the car cuts quite a dash.

There’s been no skimping on kit, either. Titanium trim brings a host of equipment as standard, but it’s the optional extras that really stand out. Among the goodies are heated and ventilated front seats, bi-xenon cornering lights, DVD touchscreen sat-nav, a rear camera blindspot info system, adaptive cruise control (with forward alert and hill launch assist) and keyless entry.

I’m not really what you’d term an enthusiastic early adopter of technology, so I daresay I’ll spend the car’s six-month stay with us struggling to get to grips with that little lot! The S-MAX has only been with us for a couple of weeks, so I haven’t had much of an opportunity to put many miles on the clock, but I’ve thoroughly enjoyed my time behind the wheel so far.

A motorway blast was dispatched effortlessly, with the muscular diesel engine – a 161bhp 2.0-litre TDCi which is new to the S-MAX range – really impressing. It’s refined, too, most noticeably at the low speeds in the city where the Ford will spend most of its time.

Crucially, though, the S-MAX is also involving to drive. While other MPVs deliver a practical package well, there aren’t many you relish taking the wheel of. The Ford is the exception, and gives the sort of agility that has become a feature of the blue oval range from the Ka upwards. Our car’s responses are further sharpened by Ford’s optional IVDC three-stage adaptive damping.

Inside, it couldn’t be more comfortable. The seats come with extensive electrical adjustment, so finding the optimum driving position is simple, while there’s plenty of space. And even when all seven seats are occupied, at no time does the interior feel cramped.

The easily wiped clean leather upholstery will come in handy when my one-year-old daughter Isla decides to toss her milk away, while freeing up boot space could not be more straightforward thanks to the fold-flat rearmost seats.

All in all, then, it’s been a very good start for the S-MAX on our fleet. Little wonder it’s still picking up prestigious prizes four years after its launch!

“I’m not surprised by Graham’s enthusiasm for the S-MAX. Few cars manage to meet such a practical brief as effortlessly without sacrificing their dynamic ability. The fact it also looks so good only adds to the appeal.”Ross Pinnock Road test editor