Flagship Ford S-MAX Vignale adds quality and comfort to the range, but is it worth the extra cost? 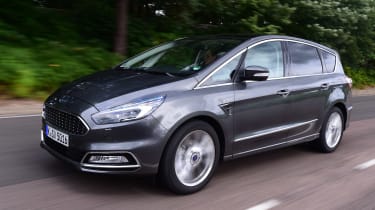 You can see Ford’s intent with its Vignale models, but the S-MAX will likely hold limited appeal to buyers. It’s not convincing enough as a luxury product, while a cheaper Titanium-spec model is just as good to drive, almost as nice to sit in and, crucially, offers the same practicality for less cash. If the posh dealer experience and classy add-ons hold appeal, however, this diesel version would be our pick.

Ford is attempting to elevate its mainstream family cars into the premium territory occupied by Audi and BMW. The fleet-favourite Mondeo was the first, and the more family-oriented S-MAX is next to benefit. This 178bhp 2.0-litre diesel version – tested for the first time – will make up the bulk of orders.

Vignale isn’t just about slapping some new badges on and bumping the price up; the S-MAX also gains a few choice styling tweaks. There’s a new chrome grille, lots of extra chrome trim on the doors and windows and unique alloy wheels with – you guessed it – a chrome finish. Parked next to the standard S-MAX the changes are noticeable; it is smarter, but we’re not convinced it’s really enough to give it a significantly more premium air than the standard model. 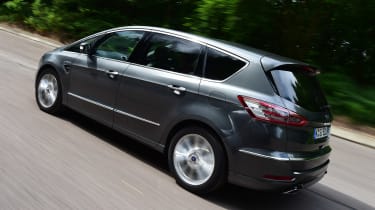 The S-MAX is already an attractive people carrier, however, so it’s inside where the Vignale has to impress. There are supple, high-grade quilted leather seats, plush soft-touch materials on the dash and doors and contrasting stitching as far as the eye can see. Our car was also fitted with optional ‘multi-contour’ seats with ventilation and a massage function, which is a neat touch, but we found the bolsters were too tight around your frame.

The Vignale’s extra cabin polish goes some way to justifying the extra £2,700 you’ll pay over Titanium Sport spec, but it’s still let down by scratchy plastics on the lower dash and a bland-looking centre console design. 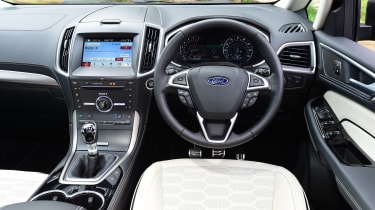 We can sing the praises of another new feature Ford debuted in the Vignale, though: the SYNC 3 infotainment system. It’s much improved over the fiddly SYNC 2 system, with clearer menus, a more responsive screen and is compatible with Apple CarPlay. Happily, the new tech isn’t limited to Vignale trim as all expect entry-level S-MAX, Mondeo and Edge models come fitted with it.

On the road the 2.0-litre diesel engine is frugal and smooth, if a bit sluggish under acceleration, although it’s preferable to the thirsty and lacklustre petrol. Given that the updates to Vignale are largely cosmetic there are no great surprises with the way it drives, with tidy body control, but the ride on our car’s optional 19-inch alloys was more unsettled than you’d expect for a supposedly premium product - it's more settled on smaller wheels. Still, refinement is strong thanks to the active noise cancellation and acoustic laminated glass.