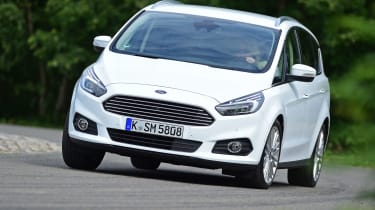 The S-MAX has grown up – and while it doesn’t look much different from before, it’s fresher and the cabin has a more upmarket feel. As with the Mondeo that came before it, sharp handling has been sacrificed in favour of comfort. But while the saloon is a disappointment, this isn’t such a bad thing in the S-MAX. The result is a hugely comfortable people carrier that is just as practical as ever.

The Ford Galaxy isn’t the only Ford seven-seater to have gone under the knife, as the company has also updated its S-MAX. This people carrier has always had a more sporting edge, with the Galaxy being positioned as the more sensible choice and the S-MAX the ‘lifestyle’ MPV in the range, offering sharper handling to match.

Although the S-MAX’s looks haven’t changed much, this model is actually all-new. There are fresh lights front and rear, and sharper body creases, and overall the S-MAX has a sportier stance than the Galaxy. Our Titanium X had optional LED headlights, whose strobing indicators add a novel touch. 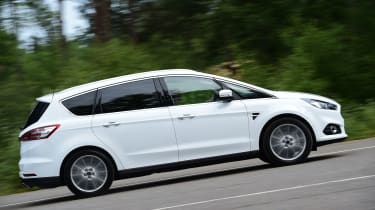 Inside, the S-MAX has been given the same upmarket look as the Galaxy. While the touchscreen and large volume knob are identical, the centre console is positioned at a shallower angle for a sportier feel. Unfortunately, that means the touchscreen is a bit of a reach away, and the screen itself isn’t especially responsive. Overall, though, the cabin has a high-quality air.

In the back, boot space is smaller than the Galaxy’s, with 285, 965 or 2,020 litres available in seven, five and two-seat modes. That’s the price you pay for the S-MAX’s marginally smaller exterior dimensions, but even if the Galaxy didn’t exist, you’d think the S-MAX is still a hugely versatile people carrier, thanks to the five individual seats in the back. The middle-row chairs slide independently, too, while all five fold completely flat.

On the road, the S-MAX feels more grown-up than before. There’s still a vague hint of its predecessor’s sharp handling yet, as with the latest Mondeo, there’s a softer edge to the way it drives. The steering is responsive and there’s plenty of grip, and even though there’s more body roll than before, this is forgivable in such a big people carrier – and it’s still better than a Galaxy in this respect. 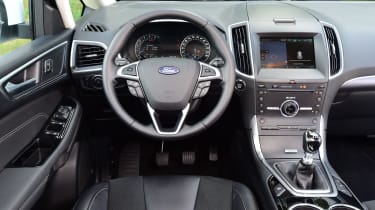 There’s also a vague hint of pitch and wallow at speeds, but it’s pretty well controlled – and that means the S-MAX is a hugely comfortable motorway cruiser. Just like the Galaxy there’s very little wind or road noise when you’re pressing on, while the engine makes itself heard only when you’re accelerating hard.

However, with 178bhp on tap, that 2.0 TDCi diesel has plenty of power – so you rarely need to give it full revs. The six-speed transmission feels precise and makes the most of the power, but again, in most circumstances you can just let the engine’s torque do the work.