Has the addition of a new 4x4 Ford S-MAX broadened the seven-seater’s appeal? 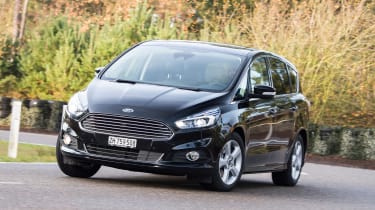 Adding all-wheel drive does little to dent the appeal of Ford’s excellent S-MAX. It’s still good to drive, practical and stylish, and the adaptive AWD system will be useful in the typically adverse British winter. In everyday driving, however, most owners won’t notice the difference between this and the standard car – and with a £1,500 price premium, higher running costs and extra weight to lug around, we would opt for the standard car.

With the British winter already making its presence known, many car buyers will be contemplating investing in something with four-wheel drive. Something like this new Ford S-MAX AWD.

Around 12 per cent of cars sold in the UK have four-wheel drive, and Ford wants to cash in on that by offering family models like the Mondeo, Galaxy and S-MAX with its intelligent all-wheel-drive system. 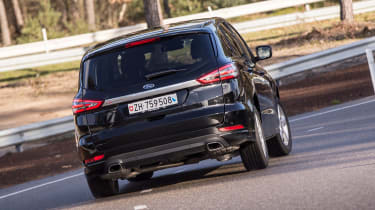 On the S-MAX, you can specify AWD on the 148bhp 2.0-litre diesel Titanium paired with a six-speed manual gearbox, or the more powerful and pricier 178bhp six-speed automatic Titanium Sport.

The 4x4 version weighs around 60kg more than the standard S-MAX, so our 148bhp version is a bit slower – getting from 0-62mph in 12.1 seconds compared to the front-wheel-drive car’s 10.8 seconds. The engine feels torquey, though, and in-gear response is strong enough that you don’t find yourself changing gear too often.

That means the S-MAX AWD is just as good as a motorway cruiser, with only a bit of road and wind noise at speed. It’s still comfortable to drive on more rutted roads, too, with well judged suspension that has a good balance between comfort and handling. Being a tall MPV, there is some body roll, but it doesn’t feel unstable through faster corners. 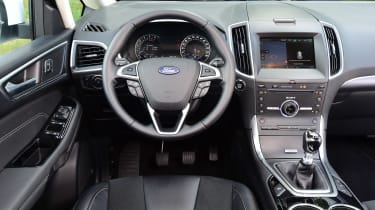 Ford’s all-wheel-drive system is adaptive – meaning it sends more power to the front or rear wheels, depending on which requires more traction. It makes the car feel sure-footed, even on the slippery cobblestone section of Ford’s test track – and in the UK, while having the AWD system is not a necessity, it certainly gives you that extra reassurance when dealing with our famously unpredictable weather.

The main trade-off is when you look at the costs, however. The four-wheel drive adds £1,500, and the cheapest S-MAX AWD you can get your hands on is our £29,195 Titanium-spec test car. 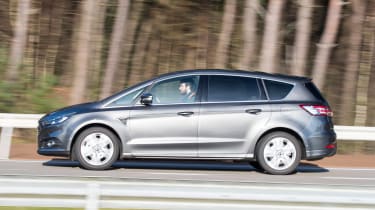 Nevertheless, opting for an AWD model over the standard front-wheel-drive S-MAX doesn’t change anything inside. You still get the upmarket interior and mid-spec Titanium models come with sat-nav, Bluetooth, cruise control, DAB radio and automatic lights and wipers as standard.

Like the rest of the S-MAX range, the AWD model has plenty of space inside. There’s loads of head and legroom and a decent 285-litre boot with all seven seats in place. Fold the third row of seats and you free up 965 litres; drop the middle row, too, and there’s up to 2,020 litres. That’s a bit bigger than the Citroen Grand C4 Picasso – and you can’t get that with all-wheel drive.