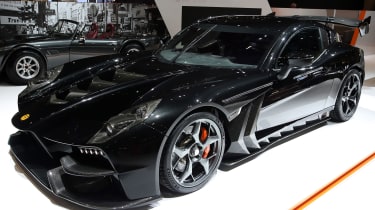 Ginetta, the British race and sports car firm, has revealed its all-new supercar at this year's Geneva Motor Show. Named after a Russian nuclear-powered attack submarine, the Ginetta Akula features a carbon-fibre tub, a sequential gearbox and functional aerodynamics.

The Akula is powered by a naturally-aspirated, aluminium 6.0-litre V8, mounted in a front-mid configuration. The British firm claims power figures in excess of 600bhp and a torque rating of 700Nm, all of which is sent to the rear wheels through a carbon fibre propshaft and six-speed sequential transaxle.

Its chassis and body panels are made from carbon fibre, giving it a dry weight of 1,150kg and a claimed power-to-weight ratio of 545bhp per tonne. Ginetta has used the experience gained from its LMP1 and LMP3 programmes, fitting its new supercar with a functional diffuser and rear wing capable of generating 376kg of downforce at 100mph. 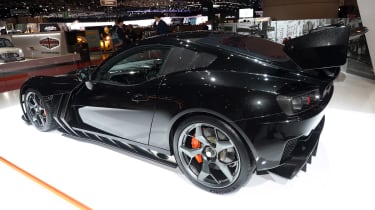 Inside, the British firm’s new supercar features a pair of Alcantara-trimmed bucket seats moulded into the car’s carbon tub (tailored specifically for each customer), billet aluminium panelling and a carbon fibre steering wheel, also inspired by the firm’s LMP1 car.

As part of the deal, Ginetta will also send each Akula owner on a customer experience day, where they'll be given the chance to drive the firm's G40 and G58 race cars under the supervision of a Ginetta factory driver. Buyers will also have access to a full pit crew during the event.

Priced at £340,000, the Akula will be built in a limted production run of 20 units from 2020, of which 12 have already been sold. The Akula is Ginetta’s latest attempt at a road car since it released the G40R in 2010. For the last 60 years, the company has focused on building its reputation as a manufacturer of formidable racing cars, with models such as the Jaguar E-Type-baiting 1965 Ginetta G10.