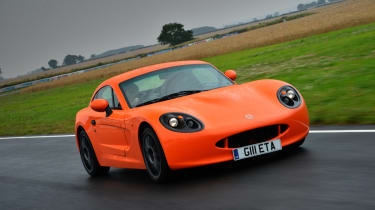 The Ginetta G40R is very good at one thing: putting a massive smile on your face when blasting around roads and race tracks at speed. And while its road-legal status and big boot mean you can use it as an everyday car, the lack of noise insulation, the unassisted steering and heavy clutch mean you really wouldn’t want to.

Ginetta is well known for its racing cars, including the G40. And now the company will also sell you one that’s road-legal, called the Ginetta G40R.

At first glance, you won’t be able to tell that this is a barely modified racing car, but squeeze yourself gracelessly into the tiny cabin and all becomes clear. A roll-cage juts out from the dashboard and sits hidden just behind the headlining, while the sparse cabin and three-stage starting procedure leave you in no doubt of the G40R’s intent.

On the move it feels every inch the racing car, too. The clutch is sensitive and heavy, the pedals are closely set and the steering is unassisted but incredibly accurate. Although it would be a struggle to drive around town, on the open road and on track it feels perfectly at home.

The 175bhp 2.0-litre engine can launch the 875kg Ginetta from 0-62mph in 5.8 seconds, but the way it goes round corners is more impressive. Even on a soaking wet track there was masses of grip and an innate balance in the chassis that made every move completely confidence inspiring.

If you’re under any illusion that the G40R is an everyday car, though, think again. You hear every noise from the engine and road in the cabin and, while the ride isn’t exactly what you would call bone-shatteringly stiff, it’s certainly not cosseting.