It's finally come good! After all the problems I've encountered with the Honda Accord Tourer (including a malfunctioning electric tailgate, scratched bumper and leaking steering rack), the car really proved its worth when my daughter Olivia was born four weeks ago. 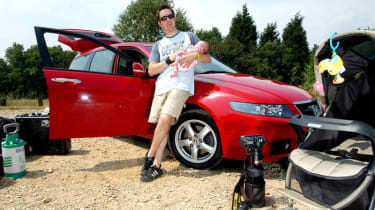 It's finally come good! After all the problems I've encountered with the Honda Accord Tourer (including a malfunctioning electric tailgate, scratched bumper and leaking steering rack), the car really proved its worth when my daughter Olivia was born four weeks ago.

The estate was pressed into action to rush my wife to hospital, and since then has proved thoroughly capable of dealing with an amazing amount of baby clobber as well as my usual photography gear. I'm now a big fan of the key-operated automatic tailgate, which was recently repaired under warranty. It means I can carry Olivia in my arms and gain access with no hassle.

It is also simple to slot her £120 Honda car seat into place. Rear-facing chairs for newborns don't feature ISOFIX mounting points, but the seatbelt wraps quickly around the baby chair and feels secure. Elsewhere, though, the Accord hasn't escaped totally unscathed. In issue 853, I mentioned that the rear bumper had suffered a 'coming together' with a bollard, and since then the front one has been scuffed against a drain pipe in our office car park. It wasn't my fault this time, but as the Accord was starting to look bruised, I checked it into Chips Away in Chelmsford, Essex.

They did a great job of removing the two scratches (I can't even see where the marks were, and the paint match is perfect), although the £329 cost seemed steep. The service was great, though. I had to cancel my initial appointment because of Olivia's imminent arrival, but Chips Away happily scheduled a second visit without any drama. Friendly staff at Ewell Honda, Surrey, made the Accord's 12,500-mile check-up pleasurable, and the car was turned round quickly and efficiently for £192. My 25,000-mile visit won't be so cheap, though, as it is expected to cost nearly £300.

Neither is economy exactly penny-pinching right now. What with all the shorter journeys I've covered while on paternity leave, it's dropped to 35.5mpg. However, once I'm back at work and doing motorway trips, this should return to 40mpg. Given how much daughters are said to cost their dads these days, that can't come a moment too soon! Pete Gibson

Second Opinion I drove the Accord recently and was slightly disappointed. The engine is still refined but the car is beginning to feel tired; for only 22,180 miles, I'd expect much more of a Honda. The same could be said of the gearbox, which is losing its slick, mechanical feel. That said, I still can't think of a better estate for the money. Lesley Harris, road tester