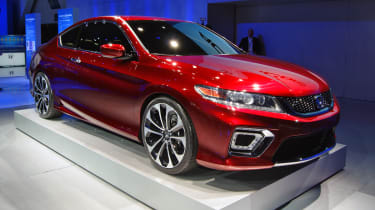 Honda has offered the clearest view yet of its all new Accord, due for launch in the UK in 2014.

Although this coupe concept is officially a US-only product, Auto Express has learned that the design will heavily influence the look of the next UK model, which will be available as a saloon and Tourer estate.

According to one insider, the key details that are expected to be carried over include the headlamp and grille arrangement, and the distinctive slashes that run the length of the car's flanks. The swooping roofline and slightly flared wheelarches are also expected to feature.

Few details about the car's engine range are available, but Honda has confirmed that the line-up will include the new 1.6-litre diesel, set to make its debut in the new CR-V later this year. The 1.6-litre four cylinder, like the CR-V will be built in the UK and offer 118bhp and around 200Nm of torque.

In the US, the new Accord will go on sale later this year, initially in saloon and coupe bodystyles. The car will offer a three strong engine range, including a new 2.4-litre four cylinder petrol unit, and an innovative new plug-in hybrid version that uses an as-yet undefined engine.

A Honda spokesman said that this plug-in hybrid is not yet confirmed for the UK, where all focus is on a plug-in version of the Honda Jazz. However, because both the US and UK versions of the Honda Accord will share some basic components, it remains an option for the firm.

Like rivals, the Accord plug-in hybrid will offer three driving modes: pure EV - with a range of around 12 miles - a petrol-electric hybrid mode, and a performance mode. The driver will be able to control which mode is deployed using buttons mounted on the dashboard.

Also new to the US Accord is a rear view reversing camera, and an innovative video blind spot display, which streams images from the car's blind spots directly into the cabin through small cameras mounted in the wing mirrors.