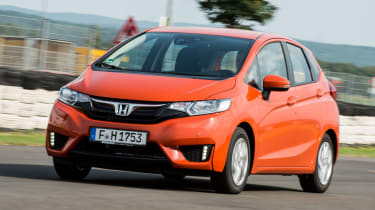 While this CVT auto model works well around town, it’s simply not as good to drive as the manual if you ever venture further afield. It’s slightly more economical, but you’re unlikely to see those gains every day. Mid-spec SE trim is the one to go for, though, adding all the kit you’ll ever need for a fair price. The manual model starts from £14,595 and is a far more attractive ownership proposition than the fully-laden £16,305 EX Navi.

We've already driven the new Honda Jazz in top-spec EX Navi trim with a manual gearbox, but how does the lesser-equipped SE with a CVT auto compare?

Spec-for-spec, the auto costs £1,100 more than the manual across the range. It uses the now-familiar continuously variable transmission (CVT) system also seen on cars like the Toyota Prius and Nissan Juke. It's a type fo automatic gearbox that doesn't actually have traditional gears, but constantly changes ratios to optimise the engine output. 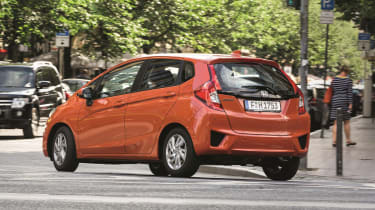 However, in a car designed primarily for the urban environment, it actually works quite well. Providing you are gentle with the throttle and don’t drive everywhere with your foot on the floor, the Jazz’s CVT behaves rather well. It’s smooth and quiet around town, and makes negotiating tight streets and stop-start traffic a doddle.

It does struggle a bit on the open road – as the engine tends to scream if you dial in too much power. And although it settles down at motorway speeds, planting the throttle to overtake makes it scream again. Performance for the CVT isn’t that different to the manual – 0-62mph takes 12.2 seconds versus 11.3 seconds – but it just feels that bit more reluctant when you’re in a hurry.

Bizarrely, Honda has installed a set of steering wheel-mounted paddles, which, in our experience, are useless and make little difference to the engine’s revs. We wouldn’t bother using these, so just leave the engine and box to do their own thing. 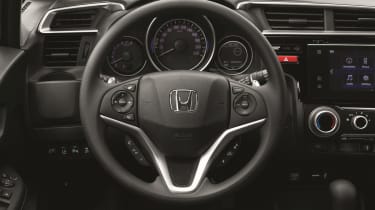 But few people will buy the Jazz for its sporting credentials. It still majors on kit and practicality, and this mid-spec SE is our pick of the range. It builds on the basic S model’s Bluetooth, auto lights and cruise control by adding a seven-inch touchscreen, alloys and parking sensors front and rear.

It also includes the brilliant Driver Assistance Package, which includes things like a Cross Traffic Monitor, Forward Collision Warning, Lane Departure Warning and Traffic Sign Recognition. For many, this alone will make the £1,100 step-up from S to SE worth the extra cash.

All cars benefit from the brilliant Magic Seats, which fold in one easy and clever movement, and there’s even a fold-flat front passenger seat if you regularly carry longer items. We’d save ourselves £605 by going for the non-Navi model, though, and buy ourselves a portable TomTom for £90.