The new Honda Jazz Crosstar adds jacked-up appeal to the range, but is it anything more than just image over substance? 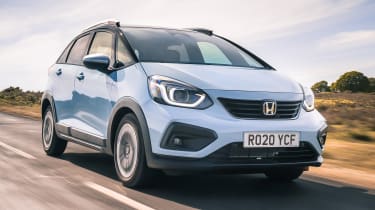 With a higher price point and only a modest increase in kit, the Honda Jazz Crosstar really is a case of image over substance. It’s slightly less efficient than the regular Jazz and despite the increased size, boot capacity takes a hit as well. It might appeal to those desperate for a slice of SUV style but for the vast majority, the regular Jazz is a much more rational, sensible option - and all the more appealing for it.

Honda knows that small-car buyers are increasingly tempted by baby SUVs, and the firm is trying to cater for some of them with the Jazz Crosstar. It’s a jacked-up version of the newly launched Jazz, with body cladding and roof rails to give it a pseudo-4x4 look – even though there’s not even the slightest pretence of off-roading ability.

Could it make sense to some buyers, though? We’ve driven it in the UK to find out. The Crosstar is only offered in range-topping EX trim and you’ll pay an additional £2,200 for it over a regular Jazz EX. For that you get the option of a contrast paint finish on the roof, a beefed-up sound system with a subwoofer and, curiously, water-repellent seat fabric – a sign of how Honda is pitching this model to those with an ‘active lifestyle’. 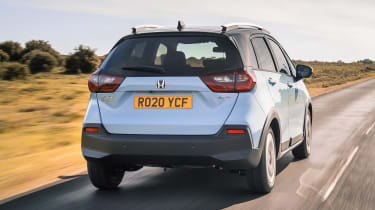 Weirdly, given this raison d’etre and the increased price, you lose the heated steering wheel that comes as standard on the Jazz EX.

Beneath it all is the new Jazz platform and powertrain - which means a very trick hybrid set-up featuring not one but two electric motors, coupled in various ways to a 1.5-litre Atkinson-cycle petrol engine. There’s no conventional gearbox as such, but the system inserts ‘steps’ in the revs, depending on throttle position and speed, in an attempt to make the Jazz Crosstar feel more like a regular automatic than a CVT.

In most situations around town, there should be enough juice in the small lithium-ion battery to allow the Crosstar to run in pure-electric mode. On faster roads it’ll flick the engine on and off as it sees fit, using it to power one of the motors which, in turn, supplies energy to the main propulsion motor. At motorway speeds, meanwhile, there’s a trick clutch system that allows the engine to drive the wheels - but only when the Honda thinks it’s the most efficient way of doing things.

The overall system output is 108bhp - fairly modest for a car of the Jazz Crosstar’s size - but there’s 253Nm of electric motor-sourced torque. The Jazz delivers this fairly smoothly, so it never feels genuinely rapid like a proper EV. But there’s enough pep for most situations - even if the Crosstar’s slightly bigger body means it’s half a second slower to 62mph than the regular supermini version. 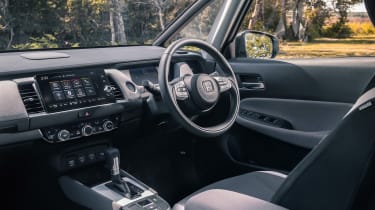 The system is just as refined in the Crosstar, too, so this is a very polite companion indeed, and while this model isn’t quite as efficient, you’re still looking at a car that’ll return north of 60mpg in most real-world conditions - without the need to plug it in.

Sadly, though, most of the Jazz’s driving dynamics have been transferred too - so there’s no discernible communication through the steering wheel and the ride is brittle on the standard 16in wheels. There is a little more body roll in the Crosstar over the conventional Jazz, too.

Inside the cabin, the increased ride height (around 30mm) is perceptible, although at no point will you think that you’re in a full-on SUV. The Jazz’s clever interior tricks remain, though, so there’s excellent rear space for a car of this size. And Honda’s infotainment system is much improved; the Crosstar gets a nine-inch set-up that incorporates all the smartphone connectivity you could want, and its own navigation. There’s a neat digital instrument panel too, although strong sunlight appears to make it illegible all too easily.

That subwoofer claims a few litres from the boot, so despite the fact that the Crosstar is nearly 50mm longer than a conventional Jazz, its luggage capacity is actually reduced by six litres, to 298 litres. That seems curiously at odds with the Jazz’s ethos.