It's not every day that Auto Express gets invited to sample the technology of tomorrow, but when Honda offered to let us loose in its latest and most secret new car, it was an opportunity we couldn't afford to miss. 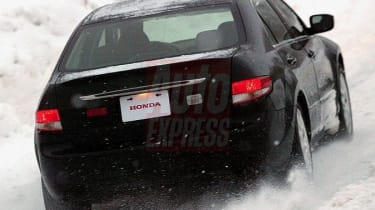 Despite its huge complexity, you don't need to be a genius to work out that the new Super Handling All Wheel Drive system is very effective and a great addition to Honda's big car range. Finally it has built a luxury model that, even at this early stage, seems worthy of BMW and Mercedes.

It's not every day that Auto Express gets invited to sample the technology of tomorrow, but when Honda offered to let us loose in its latest and most secret new car, it was an opportunity we couldn't afford to miss.

This tape and plastic-covered test mule is an early prototype of the all-new Legend, due on sale in 2005 and revealed at last week's New York Motor Show as the US-only Acura RL. Aimed at the BMW 5-Series and Mercedes E-Class, its revolutionary four-wheel-drive system is coupled to a new 300bhp 3.5-litre V6, and is one of the most hyped technology developments since Nissan's cutting-edge Skyline GT-R.

Explaining exactly how the technology works is not simple, but in a nutshell the new system offers delicate control of each individual wheel, whatever the driving situations.

Unlike the Subaru Impreza or Mitsubishi's Evo VIII, the Honda has no limited slip differentials. Instead, it relies on a series of electromagnetic clutches, which can vary the amount of power delivered to each wheel. In effect, the system is capable of putting almost all of its power through one wheel should conditions require it.

Christened Super Handling All Wheel Drive, it's Honda's first fully blown on-road 4WD system, and initial impressions are extremely promising. Even though we were driving in the snow, the SH-AWD ensured the 1,750kg prototype turned in superbly with perfectly weighted steering and followed the driver's chosen line with uncanny accuracy. If you enter a left-hand corner too fast, the system takes power from the front wheels as the car begins to understeer, minimising wheelspin.

It then directs its power to the right rear, pushing the car around the corner. All the while of course, the traction control is working in unison to prevent unexpected slips and slides, ensuring that the car stays on its chosen path. You always feel in complete control as you regulate progress with throttle and steering input.

Although there is still no official confirmation of the arrival of the new Legend in the UK, the superb combination of SH-AWD and the torquey 3.5-litre V6 will be real cause for concern in the hallowed halls of Mercedes and BMW.

No doubt they'll have heard reports from N