Honda's Legend is packed full of technology and drives well, but it doesn’t feel at all special and costs nearly £40,000 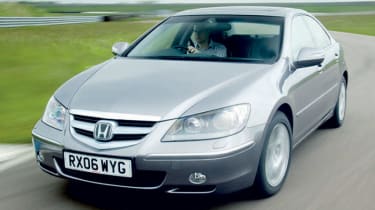 Honda does so many things right, but the Legend is little more than a big saloon. While it’s packed full of great technology and it drives very well, it’s also bland to look at, doesn’t feel at all special and costs nearly £40,000. Factor in residuals that are not likely to compete with prestige-badged rivals, and we would find it very difficult indeed to recommend buying it.

Advertisement - Article continues below
Few cars have been as inappropriately named as Honda’s Legend. There have been three different models since 1986, yet even the most knowledge­able motoring enthusiast would struggle to remember much about any of them.

But with a host of clever innovations – including a system that helps the car avoid a collision – can the latest model prove more successful? Auto Express took a test drive to find out if this Leg­end really is a rival to BMW’s 5-Series and the Mercedes E-Class.

It doesn’t get off to a great start. As with its predecessors, the new Legend is far from distinctive. Resembling a larger, softer-shaped Accord, it is unlikely to stand out in the company car park.

Things don’t improve inside. While there’s lots of leather and thankfully only a small amount of wood, design flair is lacking – this Honda simply feels like a more luxurious Accord. What’s more, legroom in the back is tight.

Still, the gadget count is epic. All Legends get electric seats, climate con­trol and rain-sensing wipers, but our car adds a six-CD Bose stereo, which features AudioPilot – a gizmo similar to that used by RAF jets which actually cancels out unwanted noise, resulting in an amazingly hushed cabin.

However, the real electronic trickery comes in the form of CMBS – Honda’s Collision Mitigation Braking System, which employs sensors mounted in the bumper. This device warns of impending accidents with a buzzing sound, and pre-tensions the seatbelts. Once the driver starts to press the middle pedal, the system steps in by applying full brak-ing power, aiming to bring the car to a stop before it hits the object ahead.

Further clever safety features include adaptive cruise control (ACC) and the Lane Keep Assist System (LKAS), which steers the car automatically to keep it in its lane on motorways. There’s more impressive technology available in the form of SH-AWD – Super Handling All Wheel Drive – which, instead of driving the axles in pairs, can send power from the Legend’s 291bhp 3.5-litre V6 to an individual wheel, depending on which one has the most grip.

The result is a very stable driving ex-perience, with excellent traction even in greasy conditions, and safe understeer at the limit. The V6 engine is great, too, with a punchy, smooth performance.

But is the Legend a real 5-Series or E-Class rival? No. It’s neither as sporty as the BMW, nor as comfortable as the Merc. And for all its cleverness, its unin­spiring exterior and complete lack of occasion inside will leave many cold.