There was nothing legendary about Honda's previous flagship saloon. With front-wheel drive and forgettable styling, the old Legend didn't measure up to its BMW 5-Series and Mercedes E-Class rivals. 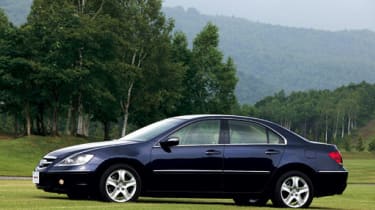 With a sharp new look, advanced 4WD and a neat interior, the next Legend is tempting. Although competing in a market dominated by German marques, Honda hopes its fresh flagship will continue the success of the Accord, and also give keen drivers another model to include on their shortlists.

There was nothing legendary about Honda's previous flagship saloon. With front-wheel drive and forgettable styling, the old Legend didn't measure up to its BMW 5-Series and Mercedes E-Class rivals. However, that could change with this all-new version - and we were first behind the wheel to try it out.

Built on a totally new platform with a shorter wheelbase and more compact body, the Honda has clearly been given a sportier edge. The front end is similar to that of the smaller Accord, while large-diameter alloy wheels and an aggressive rising waistline hint at the Legend's performance potential.

Get behind the wheel and it's im-mediately obvious that in terms of handling, Honda has come closer to its German rivals than ever before. A new four-wheel-drive system, called Super-Handling All Wheel Drive - SH-AWD - uses a hi-tech set-up to split the power between the front and rear wheels. However, the most impressive part of SH-AWD is that up to 100 per cent of the rear axle torque can be routed to just one wheel. That means the Legend offers near-perfect handling balance when cornering.

With its well weighted and precise steering the Honda turns in just like a rear-wheel-drive car, and when pushed the system adapts to provide the maximum possible grip. Couple that with a smooth ride over rough surfaces, and the newcomer has dynamic abilities which could embarrass the 5-Series.

Under the bonnet, only one engine is available - a 300bhp 3.5-litre V6. Mated to a slick five-speed automatic transmission with sequential manual switches on the steering wheel, the gutsy unit allows the saloon to sprint from 0-60mph in only 6.4 seconds.

What's more, Honda hasn't forgotten the importance of interior design in this sector. The Legend comes with fine leather and wood trim, cleverly incorporated into a stylish, plush cabin. With the model pencilled in for a UK launch in 2006, it looks as though Honda has finally hit on a winning formula for executive car success.