The Honda is well equipped, but its anonymous styling, limited practicality and disappointing engine and gearbox count against it. 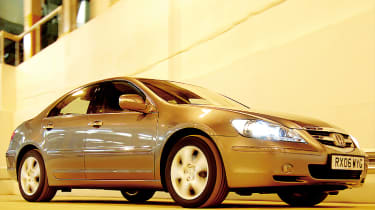 Driving Initially, the 291bhp 3.5-litre V6 struggles to make much of an impression. In typical Honda fashion, it needs to be revved - maximum torque doesn't arrive until 5,000rpm. As the powerplant emits a crisp bark under hard acceleration, that would be fine if it weren't for the gearbox. With only five ratios, and big gaps between each (second is good for 75mph), the Legend never feels particularly enthusiastic. The box shifts quickly, but it's not as smooth as a Mercedes unit, so feels busy on the road. It is also a bit noisier than you'd expect, and the ride is firmer than you might think. In fact, from the word go, the Honda is surprisingly sporting. In corners, the Legend comes close to toppling the 5-Series for handling ability. It also rides better than M Sport BMWs - although the suspension is taut, the damping and body composure are very good. The Honda feels light, responsive, predictable and well balanced. Overall, it behaves like a much smaller machine, and so diving into corners becomes second nature. Yet if you do go in too quickly, the advanced Super Handling All Wheel Drive can divert power to the tyre that needs it most, and help you out of trouble.

Marketplace The Legend is Honda's executive offering and its flagship model. It is claimed to be one of the world's most technically advanced cars - not least because it features hi-tech four-wheel drive and the acclaimed 'Advanced Driver Assist System' adaptive cruise control and lane-keeping system. This really does take the strain out of driving, helping keep you a set distance from the car ahead, and reading the white lines so you stay in lane. While it's weird initially, you soon get used to it. Even so, up against the Mercedes E-Class, BMW 5-Series, Audi A6 and Jaguar S-Type, amongst others, it certainly has its work cut out.

Owning Its lines, while bland and anonymous, disguise its size well; this is a long car, but unfortunately, a short wheelbase fails to realise the benefits. Throw in a low roofline and you've one of the most cramped rears in the executive car sector. Luggage isn't much better catered for. Not only is the 452-litre boot an odd shape, it's also seven litres smaller than the Accord's. The Legend starts to claw back points with its driving environment though. While it's not as bold or adventurous as a Civic's, the dash is relatively well organised - although the sheer complexity of all the systems on board means it's confusing at first. However given that the Legend was named Japan's Technology Car of the Year, it seems odd that Honda hasn't developed an electric handbrake or keyless starting system. On the plus side, the seats are nicely shaped and well positioned, while build quality is superb. It's just that, gadgets aside, there is no indication you're driving a £40,000 car. Servicing every 9,500 miles is also an unacceptable inconvenience in an executive motor, while depreciation will be high and fuel economy from the 3.5-litre V6 petrol is just 24.6mpg combined. There is no diesel. 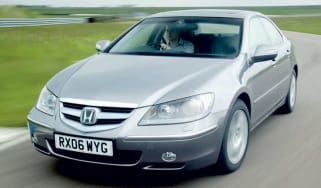 Honda's Legend is packed full of technology and drives well, but it doesn’t feel at all special and costs nearly £40,000
Honda Legend 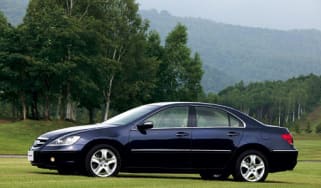 There was nothing legendary about Honda's previous flagship saloon. With front-wheel drive and forgettable styling, the old Legend didn't measure up t…
Honda Legend 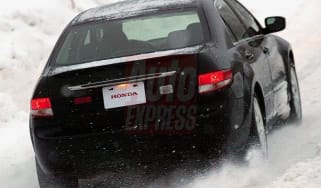 It's not every day that Auto Express gets invited to sample the technology of tomorrow, but when Honda offered to let us loose in its latest and most …
Skip to HeaderSkip to Content