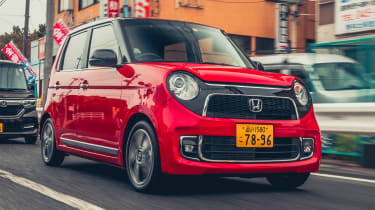 Confined to the city, the Honda N-One, or any ‘Kei’ car for that matter, makes a decent job as an urban runabout. It doesn’t match the standards set by European alternatives, however, so would unlikely win favour with buyers over here. It’s difficult not to be attracted by its quirky charm, though.

This dinky little contraption is a Honda N-One, a Japanese ‘Kei’ car designed for life in one of the world’s most congested cities. Kei cars launched in Japan back in the 1940s as a way of getting the country mobile on the cheap, following World War II.

The idea quickly caught on, and Kei cars today account for almost a third of the country’s new car sales. Unless you live in Japan, these types of vehicles are almost impossible to get your hands on – so are we being deprived of a quirky city runabout?

If there’s any Kei car that will meet demanding European tastes it’s the Honda N-One. Kitted out with a reversing camera, hill start assist, touchscreen sat-nav and a raft of safety kit, you can think of it as the Mercedes S-Class of the Kei car world. 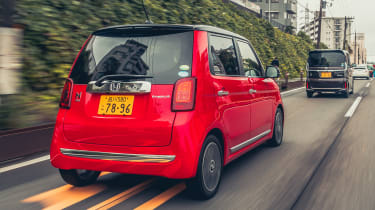 Visually, there’s no denying its cutesy image and odd proportions will win favour with style conscious European buyers, but inside it falls rather short of matching rivals such as the VW up! for style, space, quality, technology or practicality. The list goes on.

Find yourself in the back and there’s more head and legroom than you’d initially think possible; you really can fit four adults in it relatively comfortably. That space, however, has come at the expense of boot capacity – there’s room for a briefcase at a push.

It’s powered by a 660cc three-cylinder turbocharged engine, which kicks out just 54bhp and 104Nm of torque. That doesn’t sound like much, but in a car that weighs around 800kg it certainly feels enough. Pin the throttle and the N-One scampers off the line, accompanied by the enthusiastic thrum of the three-cylinder engine.

Power is sent to the front-wheels (four-wheel drive models are also available) via a CVT automatic gearbox. That means any attempt to pick up the pace on the move sees the revs soar dramatically, with the wheezy engine struggling to turn that into any sort of momentum. Having said that, hitting speeds above 30mph in Tokyo is a rare experience. 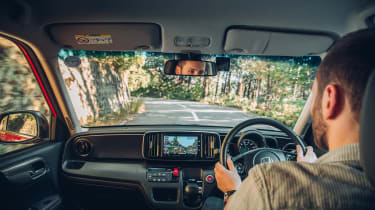 However, it’s in cities like this that Kei cars come into their own. Their tiny dimensions allow you to nip your way through dawdling traffic, slipping past ignorant taxi drivers and squeezing between crowded buses. Nothing else gets you across a city like a Kei car does – expect a motorbike, or indeed, the subway.

Ride quality is decent enough, but the steering is vague and light. At low speeds it’s not so troublesome but on the expressway and on faster sweeping roads it’s a bit of a guessing game as to how much lock you have to apply to the steering to reach your desired direction.

Given its flaws and compromises you’d expect that to be reflected in the price tag. But the N-One will set you back around 1.8m Yen in Japan, which equates to about £11,000.