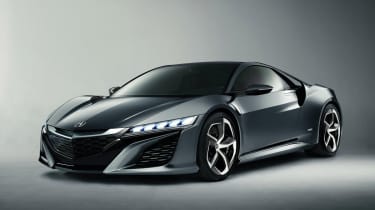 The latest version of the Honda NSX concept has made its full European debut at the Geneva Motor Show.

The updated concept was revealed at the Detroit Motor Show earlier this year, but this is the first time we’ll get to see the revised exterior design and new interior in Europe.

Inside, there's a mix of red leather and suede, as well as carbon fibre and a soft black dashboard. There are also paddles behind the steering wheel and no gearstick, which suggests that it will be offered with an automatic gearbox rather than a manual. There are also bucket seats and a touchscreen infotainment system.

Although this latest concept car looks closer to the final production car, it won't go in to mass production until 2015. And we could still see some updates in between then.

Performance details are still scarce, but the manufacturer has previously confirmed that it will get a mid-mounted, direct-injection V6 sending power to the rear wheels, with two electric motors driving the front wheels. This will give it four-wheel drive capability with a total power output of around 400bhp.