Times are tough for Hummer. Back in the US, petrol prices have crunched down on the massive H2's sales, and short of a new Middle East war, it is difficult to see how anyone could boost awareness of the military brand further. 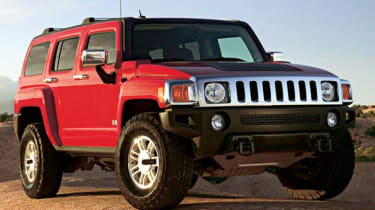 Over the top and over here - or at least it will be next year - the H3 is one of 2005's most convincing new off-roaders. While the styling will be too much for some buyers, extroverts are sure to flock to it. It's capable in the rough and reasonable to drive on tarmac, and only a lack of motorway performance is likely to hold it back in the UK.

Times are tough for Hummer. Back in the US, petrol prices have crunched down on the massive H2's sales, and short of a new Middle East war, it is difficult to see how anyone could boost awareness of the military brand further.

Not that any of this worries bosses. They have launched the H3 - the smallest Hummer SUV yet - in a bid to bring the firm into the mainstream not only in America, but here, too. Right-hand-drive versions of the newcomer are due in the UK next year, costing £30,000, and will rival the latest Land Rover Discovery.

Based on the same basic chassis as parent firm GM's pick-ups, the H3 looks every inch the globe-trotting conqueror. But as it is 15cm narrower than the H2, and nearly 45cm shorter, it will be more manoeuvrable on British roads.

Auto Express was the first UK magazine to drive a left-hand-drive example. Power comes from GM's 3.5-litre five-cylinder engine. The unit delivers 220bhp and 305Nm of torque, although this is not enough to hustle the 2,136kg H3 with authority. Hummer says 0-60mph takes 10.3 seconds, but more impressive is the claimed 20mpg economy - up on the H2's dismal 11mpg. With quick steering and a composed chassis, the H3 is more nimble than you would expect, and the 37-foot turning circle makes parking easier. Stability control boosts its safety credentials, as do curtain airbags.

Mud-plugging gear is comprehensive, and the H3's off-road ability is easily on a par with class leaders. But it has none of the automatic modes of a Land Rover; just straightforward four-wheel drive with low range, plus locking centre differentials (a locking rear diff is available).

Huge 33-inch off-road tyres help the H3 tackle rough terrain with ease, and with a standard five-speed manual gearbox, the car will trundle over boulders at idle like a tractor. Hummer claims it can even climb a 16-inch vertical barrier.

Inside, there is much more headroom than in the H2, while rear legroom is good. The front seats are supportive, but the back bench is set low, and our car's optional black trim makes the cabin very dark. Leather, sat-nav and a CD changer are offered as extras, while a metal dash insert hints at the firm's upmarket image.

The H3 feels like the US's answer to Land Rover. Genuine off-roaders may be a shrinking breed, but Hummer has coined an authentic one with this car.