You either love or hate Hummer. Originally a military vehicle builder creating huge 4x4s designed to follow in tank tracks, it now spends as much time in the limelight as the battlefield. That's due in large part to celebrity endorsements by Arnold Schwarzenegger, David Beckham and a host of hip-hop artists. 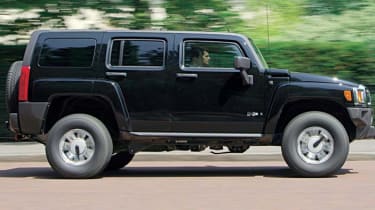 Hummers have always been dramatic - and the H3 is no different. Despite being the firm's smallest model, it's still big, and its weight hits performance and economy. That said, the H3 is easy to drive, with a well equipped and high-quality interior. But the import is expensive - we would wait for the cheaper official car, which is due next year.

You either love or hate Hummer. Originally a military vehicle builder creating huge 4x4s designed to follow in tank tracks, it now spends as much time in the limelight as the battlefield. That's due in large part to celebrity endorsements by Arnold Schwarzenegger, David Beckham and a host of hip-hop artists.

In 2001 the firm introduced the H2, either the ultimate off-roader, or the most socially unacceptable car on the planet - depending on your view.

Conscious of this car's impact, and keen to expand its range, Hummer has now launched its smallest SUV - the H3. Right-hand-drive examples arrive here next year priced at £30,000, but demand for the H3 is already strong. Some prestige car importers are bringing in left-hookers at £38,000 - and Auto Express was the first magazine to jump behind the wheel.

The H3 has as much visual impact as larger Hummers. With a big chrome grille, 33-inch tyres and flared wheelarches, it looks like a big Tonka toy. Despite its 'compact' billing, the H3 is the size of a Land Rover Discovery. That makes parking tricky, as it is difficult to judge where the bodywork finishes. Once on the move, a 37-foot turning circle means manoeuvrability is good, and you can squeeze through gaps with surprising precision.

Inside, the H3 has improved on the quality of its predecessors. Using better materials than the H2, and with a mix of beige leather trim, dark plastics for the dash and metal for the centre console and instrument panel, the effect is more upmarket. There is also plenty of space for passengers and luggage.

Power comes from a 220bhp 3.5-litre V6, but it struggles to push the two-tonne H3 with any vigour, while economy is not likely to better 20mpg. Still, the five-speed automatic shifts smoothly and the engine is quiet. The ride is comfortable, too, and the H3 is easy to drive on UK roads, even if you can never quite forget about its size.

Off-road, the H3 should be as good as its rivals, as it has plenty of ground clearance. You do not get Land Rover-style automatic terrain modes, though, just low-range and locking diffs for the four-wheel-drive system. Equipment levels have not been finalised for UK cars, but our test vehicle - which featured traction control, electric heated seats, a six-CD autochanger, climate control and rear privacy glass - probably represents the top of the range.

The H3 will not give Land Rover or Jeep many sleepless nights, but it makes more sense in the UK than the H2. Buyers who want a serious off-roader with head-turning looks will love it.