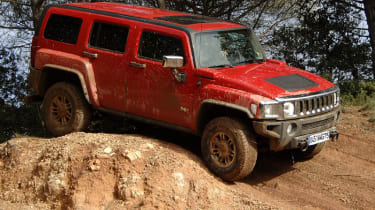 It’s no class leader, but the H3 has adequate on-road handling and impressive rugged ability. However, if the outrageous image doesn’t deter buyers, the engine’s thirst and appalling CO2 output will. The diesel, due in 2008, will make a lot more sense for those who simply must own a Hummer.

You can't buy the kind of publicity Hummer has enjoyed over the past 15 years. Regular slots on the news have made it one of the world's most recognisable automotive brands.

Ironically, the car that's attracted all the attention - the military-operated HMV H1 - has reached the end of its working life. But this won't spell the end for the GM-owned firm, as it plans to take over the world for a second time with a range of civilian vehicles.

The first of these will be the latest-generation H3. It will mark Hummer's debut in UK showrooms - and what's more, it will be right-hand drive.

Launched in America in 2005, the H3 is the third model in the Hummer line-up. It retains the unique, chunky looks of the H1, with its enormous wheelarch gaps, upright windscreen, slab-sided flanks and tiny side windows. But it's similar in size to a Range Rover Sport, which means it's more manageable on European roads.

With chrome on the wheels, grille and mirrors, it still stands out, however - and this will be its appeal for many. Yet once inside, things become more conventional. The H3's height means there is a lofty view of the road ahead, even though the small glass areas hamper visibility. The dashboard and switchgear are more traditional, and while the plastics are uninspiring, fit and finish are fine.

There is no steering reach adjustment and, given the car's size, the cabin doesn't feel spacious, yet the rear has room for three. The back chairs fold to boost the boot, but the tailgate is heavy as the spare wheel is mounted on it.

Performance isn't a strength, with the 3.7-litre engine linked to a dated four-speed auto. But the H3's steering offers positive turn-in and acceptable feedback. Body roll is comparable to the likes of Jeep's Grand Cherokee, and isn't as big an issue as you'd expect.

Designed to be a true off-roader, the H3 has a ladder frame chassis and leaf-spring rear suspension, so the ride can get unsettled on bumpy surfaces. But motorway refinement is decent.

And once into the rough stuff, the huge wheel articulation, low-ratio box and - on mid-range Adventure models - locking rear diff let it tackle worse terrain than most owners would dare.

For the anticipated £30,000 price, nothing turns heads like the H3 - and that's what will tempt many buyers.