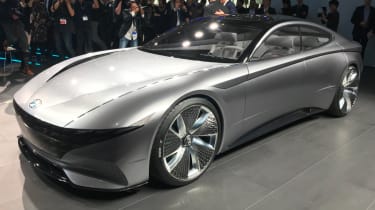 The Hyundai Le Fil Rouge concept points the way to an all-new four-door coupe, due in the next few years – but a UK launch is still yet to be confirmed.

Speaking at the Geneva Motor Show today, head of Hyundai styling SangYup Lee told Auto Express: “One of our future production cars will have a very similar look.” However, he refused to confirm any further details.

The Le Fil Rouge – which translates as the ‘Common Thread’ – is characterised by the crisp line along the car’s flanks and an overall approach that the manufacturer calls “sensuous sportiness”. This is set to drip through to regular models – Mr Lee said elements of this new design language will filter down into other cars, starting with a new model next year. 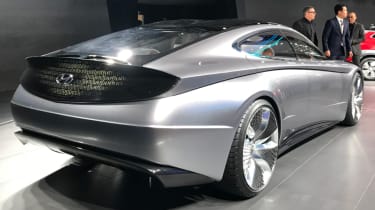 Designers used something called the “golden ratio” – a mathematical relationship found in nature – to create the car, which has a long wheelbase, large wheels and short overhangs.

The concept is also a nod to the Hyundai Coupe concept of 1974. Luc Donckerwolke, Executive Vice President and head of Hyundai Design, said: “Building on our long history of creating distinctive and sporty character in vehicles, we will open a new era for Hyundai design.” 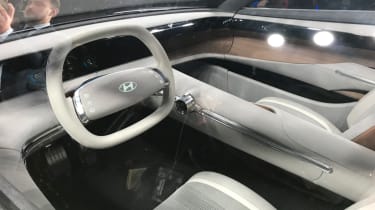 The cabin features a wraparound dashboard along with extra legroom for the front passenger, plus extensive use of wood and hi-tech fabrics. Mr Lee said the sculpted wooden elements served an airflow function, with the space usually reserved for ducting reclaimed to increase interior space. He referenced Dyson’s ‘fanless’ fans as inspiration for the feature.

The rear-hinged rear doors create a wide opening, while the centre console runs the entire length of the cabin, meaning the concept is a strict four-seater, although it appears to offer an impressive amount of space thanks to that long wheelbase.

What do you think of the Hyundai Le Fil Rouge concept? Let us know below...

Welcome to our Geneva Motor Show hub page, scroll down for all our Geneva content...
New 2021 electric Hyundai 45 SUV spied for the first time