It might not look it, but the i10 is a city car that can rival the best in the class. 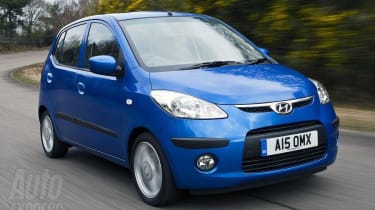 It might not look it, but the i10 is a city car that can rival the best in the class. Solidly built, well equipped and good to drive it represents a big step forward for Hyundai.

The little i10 replaces the drab Amica in the Korean firm’s line-up. While the new car lacks the cute looks of Fiat Panda, it has at least been styled with European tastes in mind. Buyers have a choice of Classic, Comfort and Style trim levels, with all versions getting alloy wheels and body coloured bumpers. Pick the range topping Style and a roof-mounted spoiler features at the rear.

Like the exterior, the cabin lacks the visual flair of some rivals. However, it makes up for this with lots of equipment and decent versatility. There’s plenty of space inside, with enough legroom in the rear for adults to sit comfortably, while a split/fold rear bench is standard. All models get central locking, air-conditioning, side airbags, and an MP3 compatible CD player. Comfort trim adds keyless entry, while Style also includes heated front seats, electric sunroof and 15-inch alloy wheels.

Only two petrol engines are available – a 65bhp 1.1-litre and a 77bhp 1.2-litre. Both units are fitted with a five-speed manual gearbox, although a four-ratio automatic transmission is optional on the larger unit. Performance from both units is only adequate, with the small engine taking 15.6 seconds to sprint from zero to 60mph. The engines can also get thrashy and intrusive when extended. On the plus side, fuel returns should be strong, with both motors capable of at least 55mpg.

On the road, the Hyundai is surprisingly good fun. A good driving position allows you to exploit the well weighted and responsive steering, progressive brakes and smooth gearshift. In the city, great all-round visibility and responsive controls make placing the car easy. And while it’s not powerful, the i10 is capable of holding its own in fast flowing traffic and it’s comfortable and refined over long distances.

Thanks to its class-leading levels of standard kit, five-year warranty and low starting price, the i10 makes a tempting proposition in the showroom. Better still it’ll return 55mpg, while most versions emit just 119g/km of CO2, meaning your annual tax bill should be just £35. On the other hand, chose the automatic gearbox and fuel economy takes a hit and CO2 emissions increase, taking it into the more expensive VED Band C.

The Hyundai has four airbags, height adjustable front seatbelts and three headrests as standard on the rear bench. As a result, the i10 notched up a respectable four-star result when tested by EuroNCAP. Most models emit just 119g/km of CO2, while a hydrogen-powered i10 is in development that produces just 65g/km. There’s also a gutsy and refined 1.1-litre diesel engine available in other markets, although company bosses have yet to decide whether it’ll come to the UK.