Latest Hyundai i10 city car gets sporty N Line treatment, just a week after the standard car was revealed 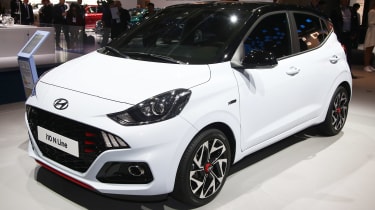 The all-new Hyundai i10 N Line has been revealed at the Frankfurt Motor Show, just a week after the Korean company pulled the covers off the standard version of its new city car.

The i10 is the fourth model to receive the brand’s N Line treatment, after the i30, i30 Fastback and Tucson SUV. While the changes to the i10 are largely cosmetic, Hyundai has confirmed it’ll be the only new i10 available with the 1.0-litre T-GDi turbo petrol engine.

• Read more about the new Hyundai i10

Exterior enhancements include redesigned bumpers and a new grille, plus exclusive 16-inch alloy wheels and LED daytime running lights. It also gets special red badges, a skid plate and a rear diffuser. Buyers can specify a two-tone roof as well.

“In the past year, N Line has become an important component of our model strategy and we are excited to introduce the N Line character to our i10 customers.”

In addition to the new 99bhp turbo engine, buyers will also be offered the standard car’s 83bhp 1.2-litre MPi non-turbo four-cylinder unit. Both engines come with a five-speed manual gearbox as standard, but the 1.2 will also be available as an auto.

Prices are yet to be revealed, but using the i30 N Line as a guide, we can expect a premium of around 2.5 per cent over the equivalent SE Nav car. That should equate to a starting price of roughly £13,500, with first deliveries due next summer.

Get all the news from the 2019 Frankfurt Motor Show here... 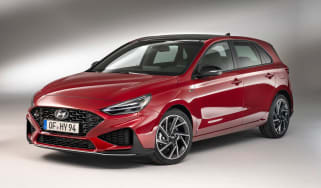