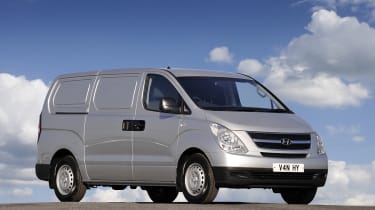 The Hyundai iLoad is a medium-weight van and is the only commercial vehicle that Hyundai sells in the UK. However, Hyundai is a manufacturing giant in Korea - it builds plenty of trucks and CVs for the Asian market - so its exclusivity shouldn't count against it. The iLoad is also sold as the i800 people carrier, and both models offer very car-like driving characteristics.

There are just two specifications available, both featuring the same 115bhp 2.5 litre diesel engine and six-speed manual gearbox. First up is the iLoad panel van, which offers a 4.3 cubic metre load space, comes with a full height metal bulkhead and has a loading weight of 1,062kgs. The second variant is the iLoad Crew Van that has six seats but also has space for a 2.5 cubic metre payload behind the passengers.

While the iLoad used to be available in Classic and Comfort trim levels, both versions now come in a single trim level – SE. Lots of comfort and convenience kit is thrown in, and the specification sheet includes driver’s seat height adjustment, air conditioning, electric windows and mirrors, plus a six-speaker stereo with Bluetooth and steering wheel controls.

With a high specification and well-equipped cab, the Hyundai is good to drive and easy to live with. Twin sliding side doors are standard too, making it easy to access the load area from either side of the vehicle. You can also order a lift-up tailgate in place of the split rear doors as a no-cost option.

The iLoad is cheap to buy, and should be reasonably cheap to run too. It comes with a five-year/100,000 mile warranty and Hyundai claims it's good for close to 40mpg on the combined test cycle.

All iLoad models are powered by a 2.5-litre four-cylinder diesel engine delivering 114bhp and a strong 343Nm of torque. The power is transmitted through a six-speed manual gearbox to the rear wheels. Hyundai claims a combined fuel economy of up to 37.2mpg and the engine emits 199g/km of CO2.

Though not bad for a van of this size, the Ford Transit Custom ECOnetic returns up to 46.3mpg and emits 162g/km, while the VW Transporter in BlueMotion trim returns up to 44.8mpg and 166g/km.

Service intervals are set at a rather regular 10,000 miles or one year, which is some way off the pace, considering the Transit Custom offers 30,000 miles or two year's servicing. However, Hyundai counters with a market-leading five-year/100,000-mile warranty, while the Ford is covered for the same mileage but only over three years. 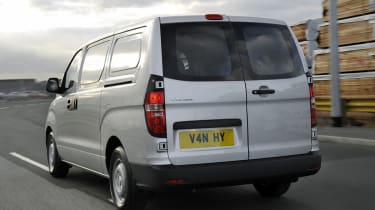 This puts the iLoad a little bit down on the market leaders, with the Ford Transit Custom delivering a volume of 5.95 cubic metres in short-wheelbase format, and the short, low-roof Transporter a competitive 5.8 cubic metres.

A full-height steel bulkhead with a window is standard on both the panel van and the crew van, and both models come with twin sliding side doors as standard. This means that it's not possible to fold and remove the rear seats to extend the load area if required, as the crew model has a fixed-load cell behind the passenger area. 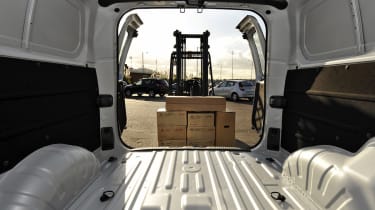 At the rear, you can have twin opening doors or an optional lift-up tailgate if preferred. The cargo area has interior lighting and there are load-lashing eyes in the floor to secure loads. Customers can also choose between standard rear doors with privacy glass or optional non-glazed rear doors for maximum load security.

Despite the iLoad being based on a people carrier, ESP was only recently made a standard fit item. ABS brakes with electronic brakeforce distribution (EBD) are standard too, and the iLoad comes with both driver and passenger airbags, and front seat-belt pretensioners for the driver and passenger. The front middle seat only comes with a lap-belt though, and the same applies to the rear seat in the Crew Van. 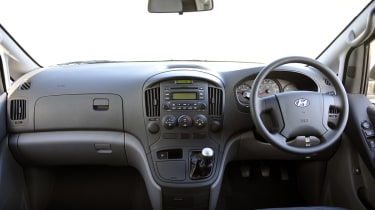 There are no reports of major reliability issues and the iLoad comes with a five-year/100,000-mile warranty to provide extended peace of mind. Though perhaps not as well known as some more popular models in this sector of the market, the Hyundai is something of an unsung hero, with buyers reporting high levels of satisfaction for the van. And with the engineering powerhouse of Hyundai behind it, there should be no worries about reliability.

Apart from the Mercedes Vito, all the iLoad’s competitors in this sector of the market only have front-wheel drive. But having the drive to the rear and leaving the front wheels free to steer means the Hyundai is very manoeuvrable, with a turning circle of just 5.6 metres. That compares very well with a short-wheelbase Transit Custom, for instance, which needs more than 10 metres between kerbs.

While 114bhp diesel is enough to move the iLoad along well in traffic, it's the engine’s strong torque output that gives it comfortable performance at higher speeds. The standard six-speed gearbox also contributes to relaxed cruising. The van’s people-carrying roots show through, too, as the noise levels are low and the supple suspension provides a comfortable ride.

The Hyundai offers a very relaxed driving environment, with a high level of standard equipment. Driver’s seat height adjustment is standard and all three front seats have independent sliding for increased legroom.

Air-conditioning is standard too, as are electric windows and electric door mirrors. All models get a six-speaker stereo with iPod functionality and steering-wheel-mounted controls. USB and aux input are also standard, as is Bluetooth. A touchscreen sat-nav can be ordered as a £510 option.

(Widths are body width without mirrors. With mirrors: 1,920mm)

(Widths are maximum, width between wheel arches is 1,272mm) 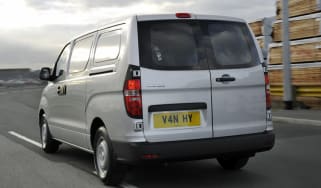 It’s half van, half people carrier, but does the iLoad offer the full package to family car buyers who want the best of both worlds?
Skip to HeaderSkip to Content