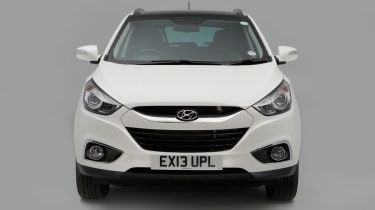 It's not long since Hyundai had one of the least inspiring new car ranges in the UK, which makes its recent transformation into a manufacturer of desirable models all the more impressive. And it’s the likes of the ix35 that have driven that dramatic change.

The crossover was designed and developed in Europe, and is stylish, well equipped and reliable. It replaced the Tucson almost four years ago, and has built up a strong fan base that loves the ease of ownership, value and unlimited miles five-year warranty.

The wraps came off the ix35 at the 2009 Frankfurt Motor Show, and the first examples arrived in UK showrooms just a few months later, in spring 2010. At first, the only options were 2.0-litre petrol or diesel engines, but within a couple of months a 1.6 GDi petrol had arrived, as had a 1.7 CRDi diesel, with optional Intelligent Stop & Go (ISG) stop-start technology. The ix35 was facelifted in September 2013, with new trims (S, SE, SE Nav, Premium and Premium Panorama), extra kit, standard LED running lights and upgraded media systems. Plus, the 181bhp 2.0 CRDi was axed.

You can get all the brilliance of the ix35 in an even more stylish design by choosing its Kia Sportage sister car. Plus, this has the added bonus of an even longer, seven-year warranty; the Hyundai has five years of cover. Nissan’s Qashqai is one of the most talented cars in this class and, unlike the Hyundai, it’s also offered in seven-seat form as the Qashqai +2.

The Peugeot 3008 is another cracking crossover, but only the costly HYbrid4 is four-wheel drive. Skoda’s Yeti is also worth a look - our Car of the Year in 2010 is a practical, reliable choice, and was named number one car in our Driver Power 2013 owner satisfaction survey.

Servicing costs should be palatable, as the ix35 needs to visit a garage just once every two years or 20,000 miles, regardless of the engine. Prices range  from £220 for a first service to £380 for the fourth check-up, after eight years or 80,000 miles. Reassuringly, all ix35 engines are chain driven, so there’s no cambelt to worry about, although fresh brake fluid is needed every two years/40,000 miles, at £31.50. The other main piece of scheduled maintenance work is to replace the coolant after six years or 60,000 miles, then every three years or 30,000 miles, at around £55.